Anti-Education: On the Future of Our Educational Institutions by Friedrich Nietzsche, edited by Paul Reitter and Chad Wellmon, translated by Damion Searls 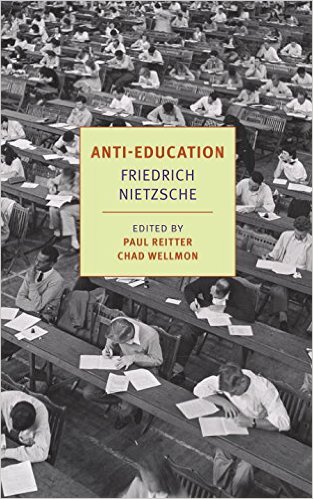 Ostensibly, Anti-Education is Nietzsche’s tirade against the German education system. But, as with all Nietzsche, nothing is straightforward and nothing is as it seems to be. In this material drawn from five 1872 lectures, Nietzsche delivers his reprimand of modern education by telling the story of two young students who encounter a professor and his former pupil in the woods and begin to discuss the merits (or lack thereof) of German education. Its similarity in style and structure to a Platonic dialogue is no surprise when one considers that Nietzsche was first and foremost a classicist by training and a philosopher only afterwards; the lectures almost appear to be a study in the classical dialogue form. If this were solely a study, however, the content of the discussion would be trivial; but Nietzsche’s words are not trivial. Like the dialogues of Plato, beneath the overt conversation on the merits of certain educational systems resides a deep and hidden reservoir from which Nietzsche first begins to draw from the waters that would later constitute his controversial philosophy. Herein are the first droplets of what would later become Beyond Good and Evil and Thus Spoke Zarathustra.

Always, for Nietzsche, the truth is hidden and never straightforward. Already in his burgeoning philosophy Nietzsche begins to doubt whether this truth is available to everyone equally, or rather only to select individuals. This question was, and remains, highly unpopular and is the questioning hiding beneath this dialogue. At the heart of Nietzsche’s attack on the German education system (and its destruction of individuality), is an attack on the very democratic principles that had come to fruition in the nineteenth century. Even though these principles were said to derive from the Greeks and Romans, Nietzsche believed the democratic ideal to be a perversion of Hellenic ideal. For the goal of modern education, according to Nietzsche, is to inculcate a reverence for the state, guiding the culture and forfeiting individuality for the success of the faceless state – for the benefit of the many. So too with modern education. Nietzsche argues, however, that the Greeks (who to him were the epitome of humanity) used the state merely as a means to strengthen culture and promote individuality. It is modern education’s attack on the individual that Nietzsche so loathes. The state is a mindless entity, an amalgam with no singular will – acting on its behalf seems almost like a betrayal against humanity (as the benefit rests only in the state and not in the individual). For the individual – the great individual – contains a will that can shape the world, not according to patterns of history or the like, but according to individual desire. It is the fear of these great individuals shaping the world according to self-serving desires that has prompted the modern masses to promote democratic educational practices that strive to dampen the impact of individuality. Instead of raising up great individuals, it brings them down to the level of the masses. In this conversation on education, we receive a glimpse at Nietzsche’s truth: the democratic ideal is the true enemy. For Nietzsche, the individual is the standard against which all things must be measured. Some individuals are more worthy of education than others and the state thwarts individual education with its universal education to the detriment of the individual and society as a whole.

Whether or not this philosophy appeals to the reader is almost inconsequential in the face of Nietzsche’s accessible prose style. He is a master of language and can turn an aphoristic phrase like no other writer before or since. More like a novelist, he is able to take those universal human experiences and put them into words that are simultaneously simple and profound: “The most remarkable, instructive, decisive experiences in life are the everyday ones; the enormous riddle before everyone’s eyes is precisely what almost no one sees as such” (Lecture V). Nietzsche sees those truths to which we have become blind, due either to the apparent banality of the image or to our own great ignorance, uncovering the truth before our eyes like a magician so that we gaze upon it in wonder as if newly made. Whether or not one agrees with what he says, Nietzsche is a pleasure to read.

I firmly hold the belief that Nietzsche, with all his philosophy, was only attempting to unveil the inner workings of human kind so we could follow that great maxim, “know thyself,” all the better. Nietzsche gets a bad rap these days for being the father of nihilism and “the Übermensch,” but he was really about something much more positive and life-affirming. If you want to learn more about this titanic figure of modern thought and gain a glimpse at his early postulations that would later inform his most influential works, then pick up the NYRB edition of Anti-Education, made available for the first time to an English-speaking audience. In doing so, you will also read some very insightful remarks regarding an education system that presents the same pitfalls, and provides the same boons, as our very own.