City of Halves by Lucy Inglis 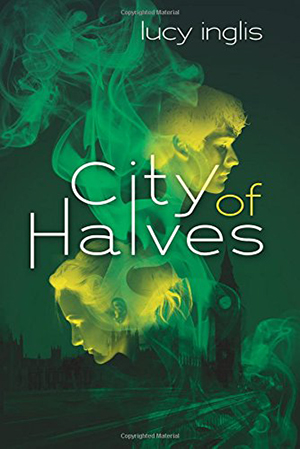 Lily spends most of her time computer hacking, until she meets Regan after a nearly deadly run-in with a strange creature. Soon, Lily learns that there is a hidden world in London that had been right under her nose, and it needs her help to save the world.

While the premise of the book is interesting and exciting, it fails to live up to its potential in most aspects. Lily started off with the promise of being a capable, smart young woman, however, she ends up coming off as rather dim after she meets Regan. There are many times when the reader can’t help but wondering why she is not asking some rather important questions. She seems to just accept things with no explanation and simply begins to trust a guy she just met with her life. Multiple times. This may have something to do with the fact that he is described as being almost supernaturally attractive.

It doesn’t help that at no time in the book does Lily save herself. Regan is always conveniently there in the nick of time to save her. At some point, the reader stops wondering how Lily is going to get out of bad a situation and starts just waiting until Regan gets there to save her. This aspect was rather disappointing and made it difficult to relate or become attached to Lily.

On top of this, there were many instances in which the lack of realism was distracting. While this book is obviously fantasy, there does still have to be a level of reality to it, mainly when it comes to things that are very similar, or that occur in our real, non-fantasy world. This becomes a problem when it comes to Lily’s father. There are rare moments when he acts in a way that one would see a father acting, but most of the time, the reader is left wondering why he isn’t reacting in certain ways when if comes to his only child. Like being a little more protective, or not letting his daughter go out on potentially dangerous errands. It feels off, and pulls the reader out of the world as they are forced to ask why these characters fail to react in any real way to the events happening.

Not to mention some of the medical aspects of this book that have no basis in reality. At some point, mild hypothermia is cured by throwing the person into a hot bath. This is the exact wrong way to treat hypothermia—in fact, it could have potentially killed them—and it’s these moments that make it very difficult to immerse oneself into the world that Lucy Inglis has created.

Despite this, there were moments that were enjoyable. Mainly this occurred when the action was toned down for a while and Regan and Lily got a chance to have a conversation with one another. These moments were at times funny and did a pretty good job of showing a bit of personality for both characters. However, it’s hard not to feel that these two seemed to be a little more familiar with each other than seems likely. It may be Lily’s blind acceptance of everything to do with Regan that gives the reader this feeling throughout the book. It sometimes feels more like this is the second book in the series rather than a first.