City on a Grid: How New York became New York by Gerard Koeppel 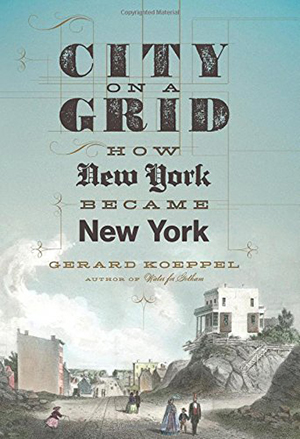 I love New York – the lights, the energy, and the hustle and bustle. It’s an enormous city with millions of people and countless buildings all living together, street after street, block after block, as far as the eye can see. There really isn’t anything like it anywhere else in the world.

But have you ever given thought as to how the streets of New York City came to be? Well, Gerard Koeppel has and he’s given an engaging account in his latest book, City on a Grid: How New York became New York.

Koeppel takes the reader on a historic journey through the early beginnings of New York, when there were literally no streets and little to no understanding of how to move forward. In order to make sense of it all, Koeppel has had to dig deep in piecing together this relative untold story, unearthing captivating facts and stories that not only bring to life the New York grid system and its origins but also the characters that built it – the city surveyors, commissioners and politicians, some crooked, most with agendas and all with a desire to leave their mark.

City On A Grid: How New York became New York is a fascinating book in understanding the history of the grid system, why it’s the way that it is, and its role in helping shape New York into the Incredible city that we know today.