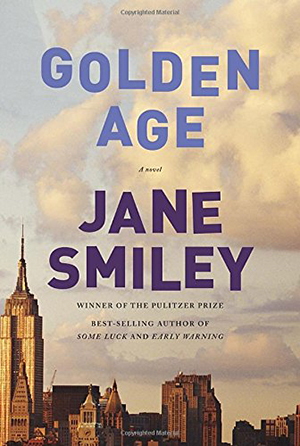 I was excited to read Jane Smiley’s, Golden Age, the third book in her recent trilogy. The first two books in the trilogy consumed and engaged me with interesting characters and a compelling storyline. Unfortunately, the third book in the series did not. The Langdon clan has grown in size and complexity, which made it challenging to follow what was going on. There were too many characters, too little frame of reference and countless dreary details that did not add to the story. Each chapter is a year, starting with 1987 through 2019. Chapters cover several characters along with world events. The Clinton debacle, Saddam Hussein, the financial collapse, and the twin towers all get mentioned in the background of the characters’ lives. Characters love, lose, and try to find their slice of happiness.

Families are complicated and Smiley’s characters deal with similar situations as the rest of us. Years come and go and little triumphs are celebrated but all of this leads to a rather boring book. Houseplants dying from running out of propane did not capture this reviewer’s interest. The attempt at seeing into the future, with years 2016 through 2019, was interesting. However, this book isn’t worth a permanent spot on my shelf.