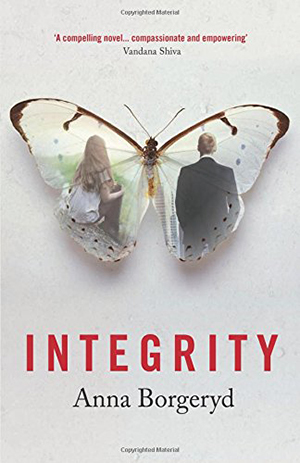 Vera is a nurse who, after narrowly escaping death while volunteering in Columbia, decides to go into economics to save the world. Peter is a third-year economics student whose arrogance is as great as his family’s wealth and whose womanizing tendencies make Vera sick. He’s equally put off by her insistence on asking difficult questions and taking everything so seriously. But when they find themselves living in the same dorm and working together on a chapter for their department’s upcoming book and conference Peter is inspired to change, and Vera begins to heal.

This Swedish novel is hard to corner into a single genre: It’s about the current relationship between capitalist shortsightedness, welfare, and the environment. It’s a love story. It’s about healing with the help of others. It’s about the power to change oneself for the better. It’s about valuing others as ends rather than means. It’s about how all of these things intersect.

It does become somewhat obvious early on that Integrity is a translated book. This leads to some quirks in the writing, and it’s also from and set in a culture Americans may be unfamiliar with; as such, the way some things are written about may seem strange at first, like how characters analyze or conceptualize their thoughts. Once you fall into the story, however – and you will – those oddities fade into near-irrelevancy. The characters are layered and each has reasonable motivations and complex histories that inform their decisions and personal issues. The love story is also very involved, giving us both perspectives and a slow development from hostile animosity to helpless infatuation.

The characters’ detailed discussions about economics may be initially off-putting to some readers, as they can be difficult to follow, but things do grow clearer as the novel progresses. There are also some areas that readers will likely feel drag on a bit unnecessarily, such as with the occasional outpouring of elaborate sentiment or with some superfluous difficulties that could have been averted if people had just finished their sentences or asked about something they didn’t understand before reacting. This is especially frustrating near the end, but the conclusion is ultimately satisfying.

Overall, though some things may be lost or made somewhat strange in translation, Integrity is an insightful, complex, and compassionate novel that’s impossible to put down once the story’s drawn you in.