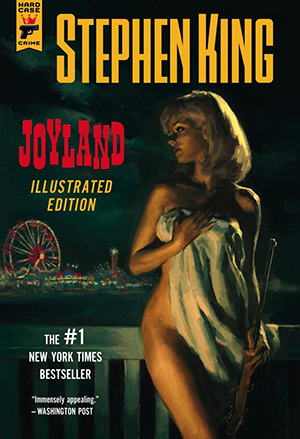 Look, it’s no secret, Stephen King has writing down to a science. The man has written over fifty novels; almost all of them best sellers and a handful considered some of the greatest literature of the modern era, not to mention close to two hundred or so short stories. King knows how to compel, entice, and ensnare audiences with his literary prowess. Even after forty-years of writing, the man continues to craft amazing stories using only his hands and his brain. So it’s no surprise that Joyland, published back in 2013, is no exception. This most recent 2015 edition contains brand new interior illustrations; over twenty images highlighting the key moments in the novel.

Joyland tells the story of Devin Jones, a twenty-one year old college student in need of a summer job. With a broken heart in need of mending, Devin finds work at Joyland, an old amusement park down in North Carolina. Pretty soon Devin makes friends with the other employees, learns the ropes of carny life, becomes the best Howie the Dog around, and slowly begins to overcome his recent breakup. It seems like any ordinary college kid’s summer, but with an old, unsolved murder that took place years ago in the park, Devin becomes more and more invested in discovering the truth behind the mystery. On top of that, he gains the friendship of a young, sick boy and his beautiful mother. What adventures lie in story for him – one must enter Joyland to find out.

It’s strange to say that Joyland certainly does have a different feel than a lot of King’s other novels, which is not to say it’s a bad book. On the contrary, Joyland makes for an excellent read all around. It’s much snappier than the author’s other books – easily read in a day or two. The text is filled to the brim with fun characters and an exciting setting; the writing just as on point as always. There is, however, not as much tension or horror compared to other King novels. While Joyland definitely contains some supernatural elements and, of course, the main murder plot, the book is tame compared to such other classics as The Shining and Pet Semetary This book, while enticing, most likely will not have readers on the edges of their seats or hiding under the bed covers in fear. Again, this is not a bad thing in the slightest, just something readers may want to know if they’re looking for a spookier King read.

While Joyland may not be filled with as much shock and awe as other King classics, don’t let that be the deterring factor. As already mentioned, it’s an incredibly fun read and very well written – as always. The descriptions in the novel are beautiful and filled with the minutest of details, allowing readers to easily conjure images of the amusement park and cast in their minds. The dialogue is realistic, humorous, and striking. While there are not many shocks, there are definitely a couple moments in the book that will send shivers down readers’ spines. The best part is that, while the story revolves around a murder, that is clearly not what this book is about. Joyland is a coming-of-age novel, in which a young person questions their relationships, place in the world, and what exactly it is they want from life. There’s also an examination of death; how death comes for people at different stages, often when they are not ready to go, and there’s not much to be done about it. It’s a book about grief, how it is people cope, and the closure needed to finally move on and say farewell.

The illustrations in this new edition of Joyland are a wonderful touch. The interior of the novel contains over twenty images drawn by Pat Kinsella, Robert McGinnis, and Mark Summers. The images range from depictions of certain characters – Madame Fortuna and Annie Ross, for example – to the important moments that take place within the text. Each picture is beautifully sketched, adding a great feel to an already great novel. Combined with new front cover art by Glen Orbik and back cover at by Susan Hunt Yule, this is a King edition avid fans will not want to miss out on owning.