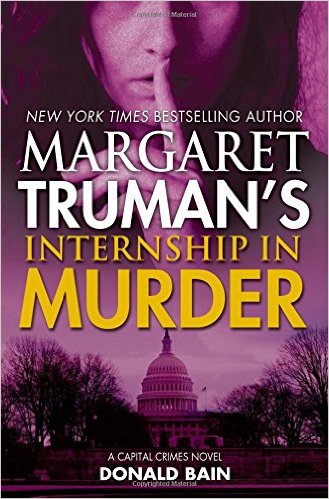 If you are a fan of Margaret Truman’s Capital Crimes mystery series, you’re going to like this one. The plot of Internship in Murder revolves around twenty-two-year-old Laura Bennett, a newbie on the congressional intern scene. The book begins when Laura arrives in Washington, DC, freshly assigned to the staff of Rep. Hal Gannon of Florida. Gannon lives alone in DC because his wife dislikes the place and prefers to live and raise their children back in Florida. In her absence, Gannon makes a name for himself as a ladies’ man around the capital city, something he tries unsuccessfully to cover up.

His conquests include the young and impressionable Laura, who falls for him, naïvely believing that he’ll divorce his wife to marry her. When she suspects he’s involved with another woman (not his wife), Laura feels spurned and angrily confronts and threatens Gannon. He reacts to her with equal venom out of concern for his political reputation. In private, he talks to himself, puzzling it all out: “‘She’s nuts,’ he told himself over and over. ‘She’s mentally unbalanced. Marry her? What does she do, live in a fantasy world’ … Had he seduced her? Hell, no! She’d been the seducer. … She knew what she was getting into. … How dare she threaten him?”

The reader, however, is never sure just how far he’ll go in dealing with Laura and her threat to his career. The relationship is complicated by the fact that Laura’s father, Lucas Bennett, is one of Gannon’s biggest and most loyal supporters. Given that it’s an election year, Gannon knows that he has to be doubly careful, for not only is he at risk of upsetting his marriage, he can’t afford to damage his well-manicured “family values” image, which might undermine Lucas Bennett’s support for him in the upcoming election.

Meanwhile, Laura seems bent on messing things up for him. Then, she disappears, which brings Lucas and Grace Bennett to Washington to look for her. As the days pass and she is not found, their parental anxiety moves them to seek the help of Mackensie Smith (a prominent character in every Capital Crimes mystery). Mac Smith is a retired lawyer-turned-law-professor who, in this story, engages the services of a private detective named Robert Brixton to do some serious sleuthing into Laura’s whereabouts. The police are also on the case, though they allow Brixton (an ex-cop) to be involved so long as he reports his findings to the detectives.

As Brixton proceeds to interview Laura’s friends and relatives, members of Gannon’s congressional office staff, and Gannon’s other (supposedly secret) paramours, what he hears leads him to suspect that Rep. Gannon has had a hand in her mysterious disappearance. By then, the story is ticking quickly along through forty-three short chapters organized into four parts: “Seduction,” “Disappearance,” “Search,” and “Discovery.” Given that there are several murders to consider, and one attempted murder (Brixton’s), the intrigue becomes thick and suspenseful enough to keep the reader’s attention all the way to a truly surprising conclusion.

All you whodunit fans take note: Laura Bennett’s disappearance is not the only mystery here. Another one revolves around the question of who wrote Margaret Truman’s novels. As the daughter of President Harry S. Truman, Margaret is one of several presidents’ children who have become noted mystery writers, each of whom, it seems, used ghostwriters. One was Elliott Roosevelt, the son of Franklin and Eleanor. Elliot’s first novel, Murder and the First Lady, featured his mother as the sleuth. Roosevelt has also been credited with other Eleanor Roosevelt mysteries, including Murder at the President’s Door and Murder in the Map Room, all of which are now widely believed to have been ghostwritten by William Harrington. One clue appears, obliquely, in a thank-you note to Harrington published in some of the early Roosevelt novels. There’s also Susan Ford, daughter of President Gerald Ford. In Susan’s novel, Double Exposure: A First Daughter Mystery, her ghostwriter, Laura Hayden, is more openly listed as the co-author. It seems, in fact, that many celebrity mystery writers depended on others to pen their popular prose.

Were Margaret Truman’s books written by a ghostwriter? The weight of expert opinion is that they were. This question is the subject of an article entitled “The Ghost of Miss Truman,” published in The Weekly Standard on November 18, 2002. The author, Jon L. Breen, names Donald Bain as the most likely to have ghosted Truman’s novels. Bain has had an enviable career as the author of over 140 books, many of which are accredited to whomever he was writing them for. He is particularly well known as the author of Murder, She Wrote, which inspired the popular TV series starring Angela Lansbury as the fictional sleuth Jessica Fletcher. With that background, he’s a good candidate for being a ghost.

Jon Breen points out that while Margaret Truman is “the longest-running and most commercially successful of the presidential offspring fronting mysteries,” she offers no hint that she relied on “a ghostwriter, a collaborator, or even a literary mentor.” Donald Bain has publicly denied writing her novels; but denying it, of course, is part of ghostwriting. In his autobiography, however, Bain waffles over it, and there are other clues to the truth. Allen J. Hubin, for example, in his authoritative Crime Fiction III: A Comprehensive Bibliography, 1749-1995, states outright that Bain wrote Margaret Truman’s mystery books, a claim that he based on reliable sources in the publishing industry.

Whether Bain did or not write Margaret Truman’s many mysteries, after her death in 2008 he became the acknowledged author of the ongoing Capital Crimes series, including Internship in Murder. This reviewer doesn’t doubt the claims of Bain’s ghostwritership, for there appears to be virtually no difference between Bain’s writing and what is reputed to have been Truman’s. The Capital Crimes mysteries read just as well after her passing as do the twenty-four crime novels published under her name between 1980 and 2008. Either way, it lends a bit more intrigue to the intrigue, so to speak, and lends more spice to mysteries that are already well spiced.