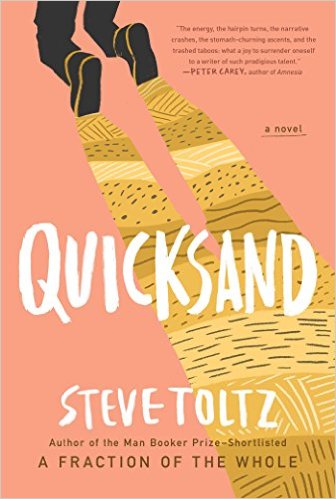 Liam and Aldos are codependent “friends.” Their relationship over the twenty or so years after meeting in high school is told in Quicksand, the second novel from Australian author Steve Toltz. Liam’s relationship is one of admiration for his friend, which inspires in him the desire to become an author. Unfortunately his efforts to write a book, any book, or the book about his friend have come to naught and so Liam has turned instead to a career as a police officer. Aldos wants to earn easy money and pursues a series of entrepreneurial projects which all fail miserably, placing him in debt to others. While Liam’s dependency is due to his pursuit of Aldos’s story, Aldos uses Liam’s position to help extricate him from trouble. There are others involved in this tale, including girlfriends, wives, parents, and children who further complicate the structure of Aldos and Liam’s lives.

There are disturbing problems with this novel. Creating multiple (legion, diversiform, many, manifold, multitudinous, sundry, numerous, various, and several) lists is a poor method to assist or deepen the reader’s understanding of a particular event or emotion. Throughout the book, lists are presented which quickly result in boredom and aggravation compelling the reader to terminate the effort of reading the book. Example: “I hated the chilling look on children’s faces during domestic disputes; I hated the potluck of dragging a river; I hated the chore of finding bodies carbonized in clandestine meth labs; I hated Tasering and spraying and bludgeoning and cuffing and detaining and hauling and warning and fining and….” This goes on for about fifteen more elements of the list. The story is presented in the first person (from the perspective of each of the main characters), third person (from a narrator and from a main character), short paragraphs, long paragraphs, multi-page single-person dissertations, and short and very long poetic passages. Often it is difficult to be clear about who is presenting the story or who is the subject. Although some of the structure appears to be an effort to evoke the personalities and frailties of the characters, it is difficult to follow.

Although the back cover blurbs describe the novel as “fearlessly funny,” “an old-fashioned page-turner” that “bursts with ideas and humor and pathos,” the reading of this novel required multiple breaks over the course of several weeks for it to be completed and extricate the reviewer from the quagmire of this particular quicksand.