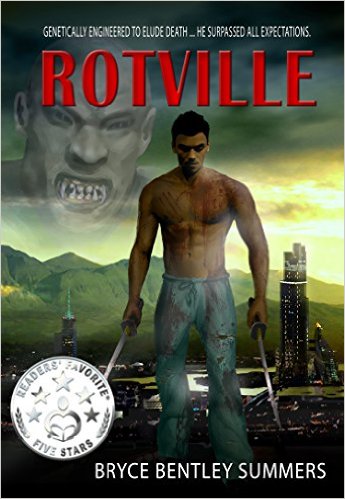 A bare-chested man stands silhouetted in the light of a setting sun. His face is downcast and in shadow, but his muscles are visible even in the weak light, as is the grim splash of blood across his chest. Is the blood his? No wounds are visible, and the red-soaked katanas he carries in his hands suggest a conquered foe instead. Perhaps the memory of that enemy (a snarling, jagged-toothed man) still haunts him. “Greed created a genetically engineered superhuman, but honor and love produced a twenty-first-century samurai warrior.”

I have just described the cover and tagline of Bryce Summers’s Rotville, and based on one look at it, you will know whether this book is for you or not.

Rotville is best described as action/horror, in the broadest sense. The basic plot revolves around experiments being performed on the residents of Collosseo, a maximum-security prison set in the middle of a nano-machine swamp (think intelligent quicksand). Director Titus Maxim North wants to create the world’s first Super Soldier, but in doing so he also ends up creating his greatest enemy: Subject 501. Thrown into this conflict are a handful of other characters, most importantly Doctor Jun, who implants false memories into people, and super-genius Aria, whose genes hold the key to the entire superhuman project.

Maybe you’ve guessed it already, but this is not for people who want character development and insight into the human condition. It is a book for people who want their favorite clichés and tropes from the genre paraded in front of them without twists, surprises, or any break in form. A mad scientist? He’s in here. A telepathic girl? Check. Secret government politics? They’re here. Gladiator ring? Zombies? Sword fights? A samurai? Check, check, check, check. None of these make particular sense when tossed together, leading to a highly convoluted setup in order to fit in all the pieces. But, hey, highly convoluted setups are par for the action/horror course, too.

All of this is more criticism of the genre then of the author. The truth is, Bryce Summers clearly knows his audience and is playing directly to them. This is Resident Evil in book form. It’s a zombie film starring Danny Trejo. These kinds of diversions are fun precisely because they are a little lowbrow; because the rules of reality are bent (broken) in favor of a man sword-fighting a super-mutant on a narrow bridge suspended over a vat of acid. Summers delivers this kind of fun with a rare self-awareness that is nice to see from a self-published author. This is evident in the fact that the writing works. The scenes of people being chased around by nimble, mindless zombies are tense; the bullet-and-blade-laden resolutions to these scenes are satisfying and adrenaline pumping. Even so, it outstays its welcome: 432 pages is a lot to ask of a reader when there isn’t a real character arc to get invested in. Action fans can find their fix here, but even the most inventive action sequences can start to feel bland when you have a whole book of them.

So, no, I cannot call Rotville great literature (because it is not), but I also cannot overly fault it for not wanting to be (and it doesn’t). I wish that its self-awareness had been used to challenge the genre rather than adhere to it, but a self-aware mutt is still better than one that thinks it’s a Great Dane. What you get here is fun, silly action: nothing more or less than what the cover promises.