Something at the Window is Scratching by Roman Dirge 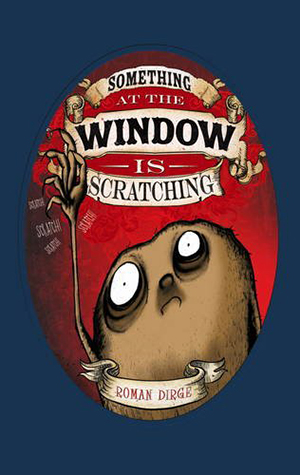 Something at the Window is Scratching is a collection of macabre poems and slightly disturbing matching illustrations. Author Roman Dirge is most well known for his series Lenore: The Cute Little Dead Girl, a cult classic comic book series. The book’s wonderfully demented forward is penned by none other than Jhonen Vasquez, of Johnny the Homicidal Maniac and Invader Zim fame, and does a fabulous job of setting the tone for the book.

The poems in the book vary in length from just two lines, to several pages, and each page of text has a matching companion illustration. The book’s poems are often rhyming couplets, and are full of half or slant rhymes. A few of the poems fall flat, or don’t quite live up to the punch line. Other poems may have benefitted from not having an illustration on every page. The book is very reminiscent of Tim Burton’s The Melancholy Death of Oyster Boy & Other Stories, and fans of his style of dark humor and quirky illustrations will likely find enjoyment in Something at the Window is Scratching. However, others may feel that Roman’s collection is subpar when compared to Tim Burton’s, and that it feels like a poor imitation of the real thing.

This hardcover edition has a solid binding, glossy pages that highlight the illustrations, and features a cute, if slightly creepy, cover. While definitely not a book for everyone – and one that many may find more disturbing than charming – dark humored individuals may want to take a look, and fans of Lenore will want to get their hands on this colorful and creepy collection.