The Butterfly Enigma by Lorraine Campbell 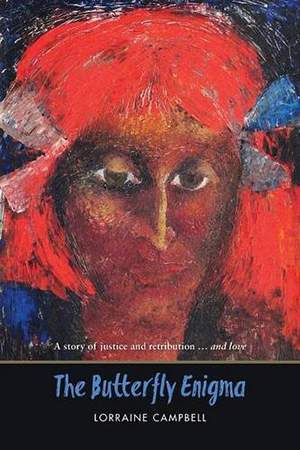 The Butterfly Enigma, by Lorraine Campbell, primarily takes place in Australia during the late 1960s. Lena Marceau has just finished a messy divorce, and is on her own for the first time in three years. Although she has family in the area Lena is determined to make it on her own and by chance she hears about court reporters and decides to give the career a try. It turns out that Lena loves being a court reporter, and she happens to be very good at it as well. Lena falls into the courthouse rhythm until one day she hears a voice from her past, a voice that summons up mind-numbing terror from a childhood she has suppressed. Lena searches for evidence that her hunch is more than a hunch, and that the seemingly high society Judge is actually something much worse; something that has ties to her forgotten childhood and the darker atrocities of World War II.

The Butterfly Enigma is a stand alone novel, although it does take place in the same universe as Lorraine Campbell’s Resisting the Enemy series, with several characters making cameo appearances and brief mentions of events that took place in the earlier books. The book is a beautiful example of historical fiction that tackles several difficult topics including Nazi war crimes, infidelity, and the ongoing struggle of feminism in what is largely a man’s world. The book spends some time focusing on the day-to-day life of a court reporter, which is brought to life brilliantly and is never once dull or boring. This is also a somewhat unusual story as it leaves things slightly open ended, with the character studying her options for her future – this doesn’t necessarily weaken the ending, it instead reflects the realities of life, although some readers may be longing for everything to be tied off with a pretty bow.

Lena is a complicated character, having survived a dark personal tragedy during WWII as well as managing to survive completely alone for a time as a child in Nazi occupied France, she has clearly developed into a strong woman. Her recent divorce from her husband didn’t destroy her; it instead made her become more self-reliant. Following this, she approaches men looking for a partner instead of a husband in the traditional sense. Some readers may find her liaison with Nordstrom a bit morally ambiguous, particularly with regards to her relationship with Harry. However, this isn’t something that is particularly unheard of, it’s just different in that we usually hear of such affairs being perpetrated by men. All said, Lena is very much her own woman, and while she may enjoy the company of a man, she doesn’t need one.

Another segment of the book that touches on a morally ambiguous topic is that of revenge. While Lena has a right to her anger, as do many others that were victims of Nazi war criminals, the lengths that she goes through to achieve her vengeance – under the banner of justice – is worth discussing. Were Lena and her friends justified? Does what they did actually count as justice? This is a difficult topic, and is a relevant discussion as this is something that appears throughout history time and time again.

Thought provoking, poignant, and bold, The Butterfly Enigma is a complicated story that beautifully reflects the messiness of everyday life. It is a story that touches on potentially painful and difficult topics, and lets the reader view things through the bold and damaged eyes of Lena Marceau – a character that proves there are many different ways of fighting back.