The Seven Madmen by Roberto Arlt, translated by Nick Caistor 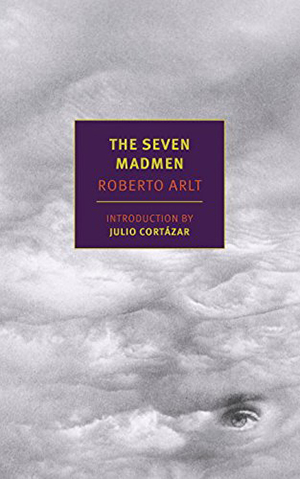 How far will mankind go to change the world in which it lives? At what point do we encounter the line and turn back, acknowledging some barriers should not be overcome for the sake of our dreams? Some individuals do not have this discretion, scoffing at the fences of morality, easily hopping over to the forbidden land on the other side. Remo Erdosian, the protagonist in Roberto Arlt’s The Seven Madmen, is one such among a host of characters who seem blind in transgressing the boundaries of society in the 1920s.

Caught embezzling thousands of pesos from his employer, Erdosian, a failed inventor, seeks a means to escape prison by paying back the stolen money. To do so, he seeks a loan from the inhabitants of Buenos Aires’ shady underworld, receiving the funds from the Melancholy Thug, a cold-hearted and contemplative pimp who pities Erdosian’s desperation. But bad tidings heap upon bad tidings as Erdosian comes home to find his wife leaving him for another man. Erdosian, in his madness over his loss, becomes embroiled in the plots of the mysterious Astrologer, who seeks to overthrow the government in order to create a society in which the majority works for the sake of a select few great thinkers who, in turn, will guide the world. Furthermore, they seek the aid of the Melancholy Thug to run the brothels that will fund the endeavor. All that is missing is the start-up capital for the venture. But do not fear! Erdosian quickly masterminds a plot of kidnapping to obtain the funds necessary to jump-start the Astrologer’s master plan.

While an intriguing plot, the book is bogged-down by philosophical wanderings and the long-winded, yet brilliant, raving-mad spells of Erdosians in which he tries to understand his alienation from the world about him. But there is no understanding truly available to Erdosian – or to us! There is only the Astrologer’s plot – a will to try another system for human existence in a desperate attempt to find a place for himself in a world that doesn’t understand his genius. In many respects, the Astrologer’s plot seems like a thought experiment as to how one might put Nietzschean philosophy into a practical governmental system, for the characters opine frequently on how the modern world seeks to squash the great individuals, the “superman inside,” whose role it is to free society from the sicknesses of cowardice and Christianity and create a new world. The sentiment just drips of Nietzsche’s philosophy. But the world is not ready for these supermen and their courage to overlook morality, just as it was not ready for Erdosian. Who knows if their plot will succeed? We are left wondering at the end. But they go on plotting anyway. If it fails, I feel like these characters would continue to go on plotting anyway, fighting with all their energy every day to make a place for themselves in a world that they feel has discarded them. In this regard, I admire Arlt for creating such desperate characters; their alienation, their desperation, feels more true and human than ninety-five percent of characters in today’s fiction. Nevertheless, the prose is bogged down in the philosophy and it is not an easy read. But if you are concerned with the revolutionary spirit of the early twentieth century in South America, if you admire prose that is stark, yet thoughtful, then The Seven Madmen may be the read for you.