The Sword of Telemon by Murray Lee Eiland Jr. 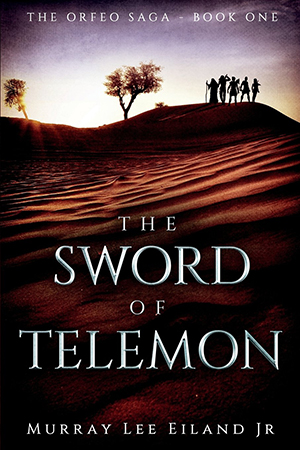 Held as a hostage in King Linnaeus’ court in the kingdom of Pylos for many years, Prince Orfeo’s return home to Achaea was met with distrust and hatred; Orfeo’s education in Linnaeus’ court marked a severe contrast between him and the wandering shepherds of his native Achaia. When Prince Herron, Orfeo’s older brother, is captured by Tyrian raiders, King Kiros of Achaia sends out Orfeo, and a band of trusted companions to rescue Herron and to secure the line of succession. Accompanied by Zurga the Wanderer, and Telemon and Orton, both famed warriors, Orfeo traverses throughout the Mediterranean in the search for Herron. While on his journey, Orfeo discovers that rescuing Herron requires intricate illusion and deception. Joined later by Clarice, an expert of deception, Orfeo joins in the rank of legendary heroes. In a fanciful retelling of mythology, join Orfeo, Zurga, Telemon, Orton, and Clarice in a hero’s adventure.

A promising start into The Orfeo Saga, The Sword of Telemon offers a narrative both descriptive and engaging. Traditionally thought of as the historical origin behind the classic story of Orpheus (Orfeo) and Eurydice, Murray Lee Eiland Jr. transforms this origin story into a stand-alone novel. Rather than incorporating supernatural figures directly into the novel, as noted in the author’s note, Eiland’s take on Orfeo provides a logical, political reason behind unfolding events. Written with masterful skill, The Sword of Telemon, however, detaches the reader from the narrative; the novel acts as a progression of events rather than a story with emotional drive moving the narrative along. While differing from traditional retellings of Greco-Roman mythology, The Sword of Telemon revives a little-known story into a full masterpiece.

Readers who have previously enjoyed works relating to the genres of mythology and historical fiction will find The Sword of Telemon a worthwhile read.