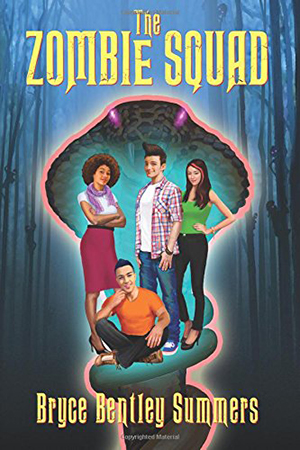 While in New Orleans to attend a leadership conference, four high school kids accidentally get entangled with an ancient voodoo artifact, which soon begins to animate the dead. The artifact is being pursued by a group of mobsters, who want to use the power of the artifact for their own purposes. As the high schoolers fight to survive and to stop the end of the world, the mobsters get ever closer to claiming their prize.

The Zombie Squad, by Bryce Bentley Summers, is a book with some internal conflicts. The protagonists are four high school seniors, trapped in a horror novel, with a good dose of sexual conversation throughout the book. There is graphic violence – but never too graphic. There is sexual conversation, but no sexual situations. There is a constant tone of lighthearted jocularity through the narrative, which is at odds with the death and undeath. While the protagonists are older teenagers, the writing style has youthfulness to it, more reminiscent of, say, Rick Riordan’s books, which feature older teenage protagonists but are grouped as middle-readers, than the young adult Hunger Games series. It is a book that might best be suited for high school freshman or sophomores, rather than high school seniors.

The story alternates between the four teenagers and the mobsters. The teenagers are definitely the best part of the book, though the personality of one of the girls, Rylee, gets a little lost at times. Sam, Jordan, and Ava, however, feel fully fleshed out, complicated, and develop further over the course of the novel. The mobsters, on the other hand, are a little dull; they are pure stereotypes, and because of the flatness of their characters, fail to be scary. The novel might have worked better without the mobsters in it at all. Alternating between the points of view of the protagonists would have been really interesting, and would have allowed the readers to really soak in their personalities. It might also have brought Rylee to life a bit more. Besides, teenagers vs. undead has more than enough tension to it without needing a third party.

The Zombie Squad is definitely a fun read, akin to watching a cult classic horror movie: a little silly at times, a little comedic, fast-paced, and entertaining. The story is definitely set up for a possible sequel, so fans of the novel will likely have more stories to come, and Summers has a slew of other dark fantasy, psychological horror, and supernatural thrillers to read.