Two Dogs and a Parrot by Joan Chittister 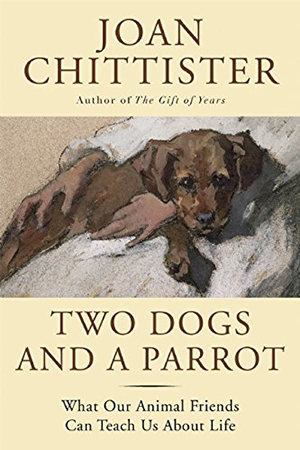 Joan Chittister is best known for her work on and with contemporary spirituality, relating the daily, mundane routines of life and spirituality to people who often cannot see those relationships. As she begins Two Dogs and a Parrot, Chittister admits her own hesitation about that comparison in writing about pets. Yet, she decides, there are times when we learn our most significant lessons with assistance from the most unlikely of sources. Realizing the companionship between human and animal encompasses instructions, she writes about three of her own pets.

The first section is about Danny, the Irish setter that is gifted to her as a pup. He is determined, active, and playful. Although she promised she would train him and keep him from being disruptive, he had a mind of his own on the topic.

The second section is about Duffy, the golden retriever that arrives as a full-grown dog, rejected from the world of show dogs. Although she thinks she knows something about handling dogs, she soon finds Duffy is a very different dog from Danny. He’s sedate and unmovable compared to Danny’s vivacious presence.

Her final section introduces Lady Hildegard, the caique. Chittister goes to visit a friend who is a bird breeder believing she did not want another bird in her life. Lady quickly changes her mind, particularly since several dates related to Lady also coincide with dates important to Chittister.

Each of the sections is divided into chapters, which detail a brief scene from life with that pet. Then Chittister expounds on how that scene exemplifies a variety of characteristics in human life as well. Some of her topics are acceptance, balance, rejection, diversity, change and essence. Reading through them, one sees the not only the depth of connection between human and pet, but also the experience of learning and growing. Two Dogs and a Parrot is a delight to read, with a wealth of spiritual connections to ponder.