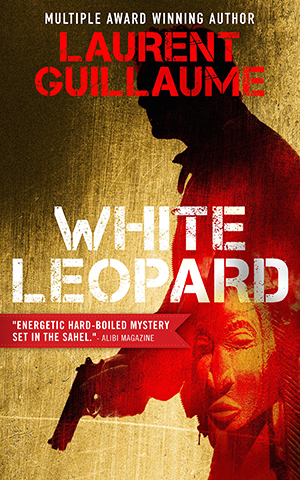 After leaving France, Souleymane Camara, a former French police officer, is now residing in Mali, Africa in the southwestern capital city of Bamako. He has established a new life as a private investigator. Because of his success he is known locally as the White Leopard. After being approached to assist with the release of an individual from police custody he finds himself mixed in a crime with locals and multi-nationals, involving graft, greed, drugs, and killings. The effort to solve the crimes is driven by personal history, commitment to the job and to friends, as well as a desire to know and understand what is happening. Solo, his other nickname, covers ground in Mali from Bamako to Mopti, Timbuktu and Gao, which provides a view of the nation and its people.

This is one of seven novels written by Laurent Guillaume. He is a Frenchman with personal education in law, the police, and has worked in France, Chad, North Africa, and Mali as a police officer and advisor until 2013 when his writing became full time. This is the first translation into English. This reviewer was using an uncorrected advance reader copy, which had some misspellings and a few “wrong” words – otherwise very good.

The story is very easy to read, flows fast with plenty of action and description giving a vivid presentation of the crime world and the country. With the multiple towns, the buildings and streets, and the countryside detailed, a flavor of the nation is provided. The story is presented in first person from the perspective of Solo.

As the only negative, the character of Solo falls into the classic “gumshoe” PI. How many times can an individual stumble into the situations filled with danger and risk, be beaten and bound, be depressed, swill alcohol, and survive it all? It is recognized this story is based on true events, but it is hoped that this is not the routine for Mr. Camara! We may find out with further translations.