A Strangeness in My Mind by Orhan Pamuk, translated by Ekin Oklap 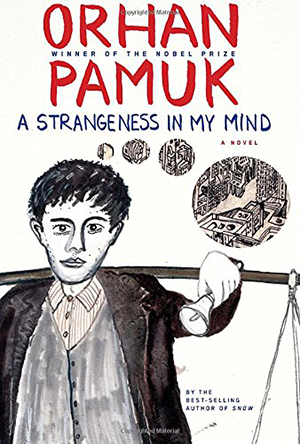 A Strangeness in My Mind, by Orhan Pamuk, is a meandering story of one man’s pursuit of good fortune, and continual near miss of it. Mevlut Karataş has dreamt of what his life would become from a young age, and at 12 years old he moves to Istanbul – the center of the world – to discover his fortune. Throughout his life he holds many jobs, but every night he wanders the streets selling boza and considering why those around him seem to be more fortunate than he; he even falls in love with a girl at first sight and after three years of pining accidently elopes with her sister. His late-night wanderings afford him plenty of time to consider the “strangeness” in his mind – the feeling that has plagued him his entire life that makes him feel different from everybody else.

Orhan Pamuk’s writing is always a pleasure to read; it’s no surprise he won the Nobel Prize for literature in 2006. A Strangeness in My Mind focuses on Mevlut Karataş, but is not told exclusively from his perspective. The reader is treated to the point of view of family members, friends, neighbors, and strangers observing and interacting with Mevlut through his life. This multiple perspective approach breaks up a narrative constantly listening to Mevlut’s internal monologues that would otherwise become monotonous. The main detractor is the author dropping the reader into the story with little explanation of who the characters are, and jumping around in time. It makes the story hard to follow at times, especially with the shifting perspectives. This is the case in most of literary fiction though, and readers of the genre will feel right at home with this book.