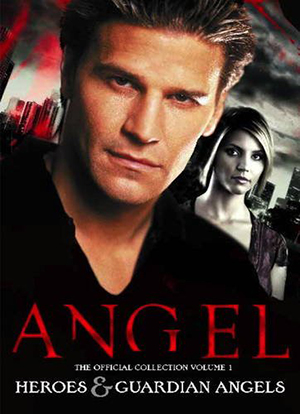 Angel: The Official Collection Volume 1 brings together some of the best selections about Angel’s heroes from the official magazines of both Buffy and Angel. Full of interviews, episode spotlights, and character overviews, this collection is a great addition to any fan’s library.

While some of the selections in the volume don’t seem of much value to an avid fan – as they tend to just reiterate facts a fan would already know – the majority of the book is made up of interviews with the cast and some entertaining extra features. Ever wonder what kind of job Angel would have if he wasn’t helping the helpless? This has some ideas. It’s little tidbits like these that really make this collection a fun read for avid fans of the show.

One of the best parts of reading through this collection was the nostalgia factor. Not only do fans get to relive their days of watching and obsessing over this show, they also get to smile – and sometimes roll their eyes – at the beauty that was magazine design in the late 90s early 2000s. These pages are taken straight from the magazines, questionable typeface choices and all. There are even some images that would never make the cut in a magazine today during an age when cell phones take better pictures than the digital cameras did back in the early 2000s.

It may seem like this would deter readers, but rather, it adds a great deal of charm to the book. And yes, while there some admittedly low quality images and a few typographical issues, most of the material is well done and interesting.

Overall, this a fun collection to have for any fan of the series if only as something to flip through every once in awhile to remember the days when vampires were cool – and didn’t sparkle.