Audacity Jones to the Rescue by Kirby Larson 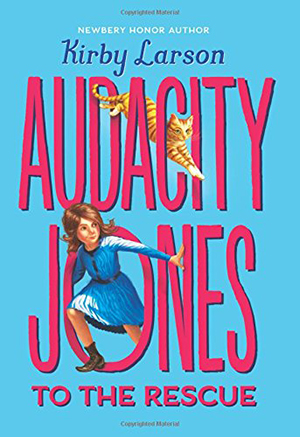 Audacity lives in a home for girls with sixteen other wayward girls. She is typically in trouble for one thing or another and spends a lot of time in the “punishment room.” On Christmas Eve one of the home’s benefactors, Commodore Crutchfield, shows up to deliver his annual check but curiously asks to take one of the girls on a mission. Audacity volunteers and is quickly whisked off to Washington D.C. with the Commodore and his mysterious driver, Cypher. Somehow, Audacity’s cat Min, hides in the car and joins Audacity on her adventure. Almost immediately, Audacity senses that actions and facts do not seem to add up, especially when it concerns Cypher and his secretive phone calls. At the same time, the girls left behind in the girls’ home begin to have premonitions about Audacity’s safety.

This is a book for eight- to twelve-year-olds, although it might be a tad too complicated for the younger bracket, as there are lots of innuendos that a younger reader might not pick up on. There is an element of fantasy with this novel, given that Min the cat can have thoughts as if she were a person. Young readers will easily be drawn in by story due to competing details and that the setting is the White House with President Taft. Audacity Jones to the Rescue is an engaging, and sometimes humorous, mystery that the reader will want to solve.