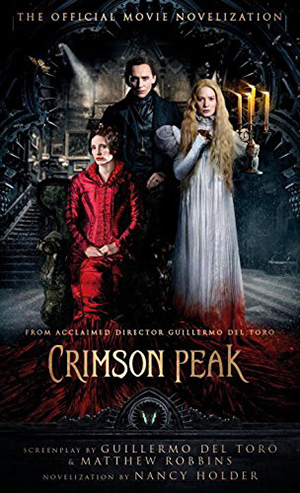 The novelization of Guillermo del Toro’s Crimson Peak is here. Follow Edith, an heiress in New York at the dawn of the twentieth century, as she’s swept away by Sir Thomas Sharpe to an English house of horrors after the mysterious death of her father. Edith’s new sister-in-law, Lady Lucille Sharpe, has her own designs for them all, and in Thomas’s fight to keep his past hidden from Edith and his desired future hidden from Lucille, Allerdale Hall plays host to betrayal and tragedy once more.

Like the film, the novelization is imperfect, perhaps even more so than its source material due to some of the more experimental aspects of the book. However, like the film, it entrances despite its flaws. While the story itself leans heavily on the traditions and tropes of gothic romance in general, the beauty with which it’s carried out forces the observer’s forgiveness for its predictability. The language, though occasionally purple, is fitting and very successful in maintaining the overall tone. As for additions, there’s some bonus material that fans of the film will appreciate, including a glimpse of the Sharpes’ childhood, the complex inner lives of several of the main characters, and a few scenes we didn’t get to see in the film, as well as slight extensions for a handful of preexisting ones.

It will disappoint some that this was not Edith’s novelization of the events but a fairly direct novelization of the film instead. Other aspects that might be off-putting include the addition of the house’s perspective, which makes little sense; a rare point of view that fails to increase intrigue despite probably being snippets from Edith’s book; the characterization of Lucille as a child, which some may feel takes a route that oversimplifies her; and an additional love story near the end, which will please those who prefer romantic endings for all but may annoy those who find them unnecessary.

For all its flaws and quirks, if you liked the film, you’ll enjoy squeezing a bit more out the story with this novelization. It’s not a masterpiece, but it’s a far cry from a waste of time.