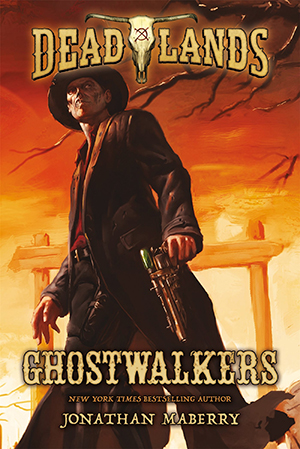 At one point in Deadlands: Ghostwalkers, main character Grey Torrance proclaims, “Demons now? We have the walking dead and screaming storms, and now you want to add demons to this stew?” This is one of many self-aware comments the characters in Deadlands make, and it highlights the book’s main obstacle. There are demons in this book. And zombies. And wizards. And gunslingers. And mad scientists. And… well, it’s a lot for one novel to handle.

Ghostwalkers takes these insanely disparate elements and weaves them into a story centering around the exploits of gunslinger Grey Torrance and his partner, Thomas Looks Away – a British, Native American, shaman (get your head around that, if you can). Both men have dark pasts, which they are forced to confront in quite a literal form, as a mysterious superfuel called “Ghost Rock” begins summoning the restless dead from their shallow graves.

Set in the RPG universe that shares the book’s name, Deadlands is a genre-mash, a mixture best described as Civil War historical fiction where real magic exists alongside steampunk innovation and where, occasionally, the dead walk the earth to do the bidding of necromancers. Oh, and there are dinosaurs, sometimes. How well you think Ghostwalkers juggles this panoply of chaos will go a long way towards whether you end up liking this book or not.

On the positive side, Ghostwalkers never lacks for action and excitement. How can it, when any given page turn can jump you from a poker game into a fight against an undead Saber Toothed Tiger (that’s not a joke: that happens). There is also quite a bit of humor to be found, as the characters eye-wink at the reader. Grey’s horse is called Mrs. Pickles, for one thing. Thomas Looks Away keeps referencing the Queen’s Bloomers. There’s a constant touch of tongue-in-cheek here, as if the author knows he is writing something ridiculous (and he is) and has enough skill as a writer to poke fun at that without losing his pacing – and, to his credit, he does have this skill. Everything you might like about a Hollywood Western is here – from hookers with hearts of gold to six-shooter stand offs in the high desert – mixed with everything you might like about a Hollywood b-horror – the afore mentioned comedy being a big part of this.

On the downside, Ghostwalkers never goes beyond Hollywood.

Jonathan Maberry is an accomplished enough writer that his book is polished and easy to read, but even so, Ghostwalkers is what one might call lazy fantasy. It’s fantasy that draws upon everything that has come before it, without adding anything new. As a result, all the right beats are here for an entertaining read, but not a memorable one. This is particularly true of the main characters who, despite their eclectic back stories, are as about as invested in this tale as Harrison Ford was in Indiana Jones and the Kingdom of the Crystal Skull. Grey Torrance is here to sound cool, look badass, and shoot his guns. Looks Away is here to tell him (and the reader) what’s going on and where to point those guns.

The end result is a book that works – with characters who move us from one explosive attraction to the next like overworked tour guides – but also a book that says very little in its 500 pages. This is pap, pure and simple, and on some level there’s nothing wrong with that. But other series (such as The Dark Tower) have proven that genre mixing can be done in a meaningful and powerfully emotional way, without losing the gunfights and the monsters. You have to start with a message to build a strong story, and while Ghostwalkers has a story to tell, it is a hollow one, with no message to deliver.