Everyone Has Their Reasons by Joseph Matthews 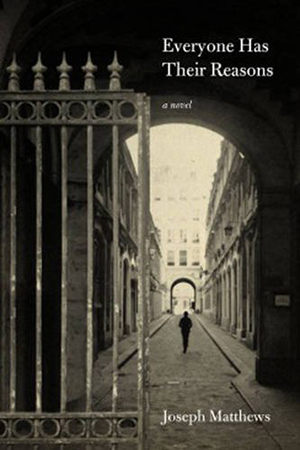 Matthews follows a real person with a fictional account of his life, since little information is available. What is true is that 17 year-old Herschel Grynszpan shot a German official during Nazi Germany’s terrorization of the Jews in 1938. Three days later, the Nazis respond with Kristallnacht, a night of Jewish beatings and killings.

In the book, Herschel writes letters to his lawyer during his three-year imprisonment while waiting for a trial. In these letters, the reader learns about Herschel’s life in “no man’s land” where he is not a German, Polish, or French citizen and therefore has no home or rights. With no money or means and no country to call home, Herschel takes desperate measures to find out information about the whereabouts of his family left in Hanover.

Everyone Has Their Reasons presents a common topic in an inventive manner—using journal entries and letters to share details leading up to the main moment in the story. Matthews painfully discloses details, sometimes in a most tedious manner, to share Herschel’s story. Even though Herschel really existed, since little evidence remains, Matthews has used fiction skillfully to present his ideas of what could have been the driving force behind Herschel’s shocking, and understandable, actions.