Finding Peace in Life and Death: A synopsis of Reality Versus the Human Mind by Patrick Baxter 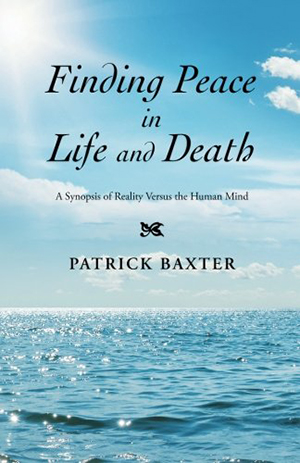 Finding Peace in Life and Death, by Patrick Baxter, gives readers an introduction into the spirituality and practicality of death. Baxter effectively and comprehensively weaves together the similarities of many different philosophies and religions that surround the themes of death, and reality as a human construct. This is a beautiful read and is an ideal first book for readers who are interested in philosophy, spirituality, self-help, and comparative religion.

The book is divided into two overarching parts. The first, titled “The Role of Reality in Life and the Pursuit of Happiness,” delves deeply into theory, and seamlessly scaffolds thoughts surrounding the ideas of ego and a person’s essence, which in the book is also called divinity. The second part of the book is called “The Second Coming: The ‘I’ of the Beholder,” and uses the previously discussed themes and applies them in larger contexts than just the self, including social structures, the world, and the entire universe.

Finding Peace in Life and Death maintains a balanced blend of information and approachability. It is wonderful for novices to the subject – the intended audience. Baxter’s voice and style of writing is simple, straightforward, and easy to understand. His command and understanding of the subject matter leads to wonderful explanations, analogies and visual interpretations of extremely difficult, ancient, and abstract theories. He does not oversaturate the reader in information. Rather, the book is fairly short and nicely paced. The chapters are brief, and although not necessary in the eBook version, there are blank pages at the end of each for personal note taking. Baxter writes in a very familiar way, and shies away from large words and complex sentence structures. There is nothing pretentious about the way he writes, and his tone is non-judgmental and empathetic.

A main purpose of this book is to help people understand the process and inevitability of death. Baxter takes wisdom from major religions such as Hinduism, Buddhism, and Christianity and intersperses those ideas over philosophies of some great philosophers, including Immanuel Kant, Robert Pirsig, and William Shakespeare. The list of people who are cited and whose ideas are explained are so many and varied that it would be beneficial if the book had an index or glossary. This would be a boon especially because this book is masterfully crafted, beautifully synthesized and so interesting that it will inspire readers to further think, and read about this subject. This book is highly recommended for anyone who is beginning to navigate the murky waters of spirituality and philosophy.