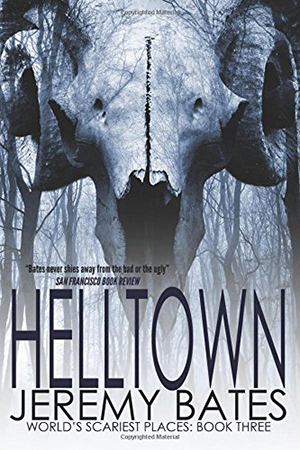 In Helltown, the third installment in his World’s Scariest Places series, Jeremy Bates takes readers to Summit County, Ohio where, we are told, dark and mysterious things happen. Urban legend – or is it? Set, as is every novel in the series, in a location that actually falls prey to rumors of the occult – in Summit County’s case, the author tells us, the legends largely focus on empty houses, Satanism, and human sacrifice – the book opens in the middle of a violent and stereotypical Black Mass, a prelude to the events that will take place over the course of the novel.

On Halloween 1987, an unconvincingly diverse group of friends drive in two separate cars out to Summit County: a douchebag stockbroker and his makeup artist girlfriend, two med students, some punk rockers – all hopped up on alcohol, interpersonal dissatisfaction, anxiety and, in at least one case, cocaine. Intent on investigating the rumors of the occult, they set out on what’s supposed to be an eerie Halloween adventure but quickly spirals into something much more sinister. When one of their cars is driven off the road by a hearse, this thrill-seeking trip to the country quickly turns into a fight for their lives, as the friends are picked off one-by-one by a cult of redneck Satanists.

While it’s difficult to judge Helltown without having read the other two novels in the series, the story stands on its own as one of human evil. Readers who aren’t particularly into gore and violence and who seek characters with whom they can feel a strong connection – three-dimensional characters – may be disappointed. Bates’ characters’ inner lives are not as important to the story as the evil that occurs, and their motivations are often muddy. They fall prey to stereotype too often in the overwrought manner that has come to define stories of this genre. However, if horror and murder and violence are your bag, Helltown just may be the novel for you – it has all of those in spades. The writing is strong, and the author doesn’t shy away from even the nastiest of details.