Karma’s a Killer: A Downward Dog Mystery by Tracy Weber 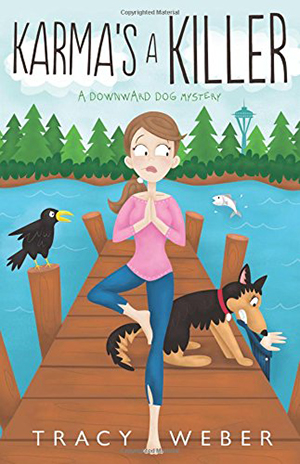 This is an interesting though somewhat complex story about dogs, yoga, a public fund-raiser, and a bit of trickery, all wrapped up as a murder mystery. If you like cozy mysteries with lots of dog and human intrigue, Tracy Weber’s books are among the best. Her previous books ‒ A Killer Retreat and Murder Strikes a Pose ‒ and now Karma’s a Killer, each skillfully combines a twisted plot with dogs and canine handler shenanigans, and yoga, set in the midst the main character’s busy life in the Pacific Northwest.

The story is about Kate Davidson, a yoga teacher in Seattle who teaches ‘doga,’ yoga for dogs. During a promotional ‘DogMa’ fundraiser for a local animal shelter, Kate confronts a series of challenges. For one, the fundraiser is disrupted by a group of animal rights protesters who proceed to cause havoc ‒ physical, personal and mysterious. One protester is a woman named Dharma, who figures prominently throughout the book as an unexpected and unsettling intrusion into Kate’s life. Another is darkly withdrawn teenager named Marla, the “Goth Girl.” And a woman named Raven, who, not far into the story, is found murdered, setting Kate and her partner, Michael, off on a quest to discover the killer.

Everywhere Kate goes, her dog Bella goes with her. Bella is a disabled dog, which adds depth and, for dog lovers, keen interest to the plot. Bella suffers from Exocrine Pancreatic Insufficiency (EPI), an autoimmune disease that leaves her unable to digest food on her own. As Kate tells it, Bella’s food has to be prepared “in a highly customized way,” including grinding, mixing with water and enzymes, then waiting twenty minutes “while the disgusting-looking concoction” incubates.

Given her disability, Bella cannot be left alone for long periods of time, and she is also highly protective, which adds more complication to Kate’s life.

Besides managing Bella’s needs, and taking her everywhere, Kate is a skilled and popular yoga practitioner with a busy schedule.

All of these elements combined make for an active and compelling narrative.

Along the way, the reader not only learns about interpersonal idiosyncrasies and dog-human relations, but a lot about yoga. At one point, for example, when Kate and Michael have a squabble, Kate reverts to yoga to calm herself. She did not want to lose her temper, she says:

These snippets about Bella, Kate, Michael, and yoga all hint at key aspects of the story, throughout which you’ll be hard pressed to guess who the murderer is, and why, until perhaps at the very end. In between, you’ll be rewarded with a mystery, or more correctly a series of mysteries, which all add up to a good read.