Kepler and the Universe by David K. Love 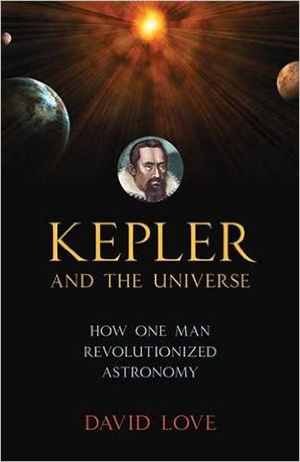 David Love’s short biography of Kepler focuses on his scientific advancements and the ways in which his work contributed to moving science forward. Although Love addresses Kepler’s life in the book, it is primarily in the background, and used as an explanation for why Kepler made the choices he did.

The positive side of this book is that it is easy to understand, and all readers with a basic scientific understanding should be able to comprehend even the advanced science. The many diagrams also make complex ideas readily available, even to readers who have not looked at a science book in a long time. The downside of this book is that it reads like the aforementioned science textbook. David Love obviously understands the science well, and from his position as an academic, he can see the significance of the science. But the lay reader needs a not only explaining the mechanics of the science which he does well, but why it matters, and more importantly why the reader should care. Modern readers are brought up with a heliocentric model from birth, and it can be hard to make the connections about why this idea was so important and revolutionary.

Love also mentions his chance to capitalize on some of the more important moments in Kepler’s life. Here is a man that was fired more than once for refusing to compromise his religious beliefs, being pushed out of his home due to religious conflict. Love doesn’t capitalize on these more human (and more interesting) moments in Kepler’s life, instead skimming over them with a brief mention, and not giving the context that some readers may need to understand the intensity of Catholic-Protestant conflict in this time period. Ultimately, Love’s goal is noble, and the short and accessible text will appeal to readers who are already interested in the subject, however, he unfortunately misses the mark for the general reader, who he seems to aiming for.