Kimono: The Art and Evolution of Japanese Fashion by Anna Jackson 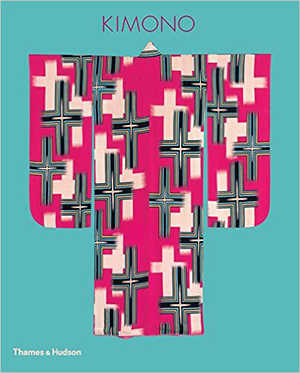 Kimono: The Art and Evolution of Japanese Fashion is a book that lives up to its name and is a wonderful resource for anyone interested in learning about the kimono, its history, and its evolution over the years. The book begins with a general explanation of the kimono, the difference between a kosode, and introduces Japanese terminology for the various pieces of kimono dress and culture. This section is quite informative and will be of interest for the casual observer as well as the more studious reader.

Following the introductory chapter, the book is organized into three sections dividing the material by time period: Edo (1603–1868), Meiji (1868–1912), and Taishō and early Shōwa period (1912–1950). Each section contains an introduction to the era, giving readers a rundown on the fashions of the era as well as a brief history of the time period. The featured kimonos are laid out – either on a flat surface or hung from a rod as they are often displayed in museums – and photographed from the back, which is usually the area that is most intensely decorated. Some kimonos are also photographed to show the inside, depending on the uniqueness of the decoration. Most of these shots of the back of the kimonos take up a full page, with the facing page having a close up shot that highlights a particularly interesting area and gives the reader a look at the incredibly intricate embroidery and dye job. There is also a small text box for each kimono that describes who the kimono was intended for – women, men, young women, young boys, or children – as well as describing the type of fabric, paints, dyes, embroidery, when they think the kimono was made or when it’s type was popular, the size of the kimono, and a short summary as to what kind of function the kimono was intended for or the importance of the scene or pattern depicted.

The book contains 400 images, with the majority being photographs of kimonos. There are also images of woodblock prints – from the earliest eras before cameras were a common occurrence – depicting men and women wearing kimonos of the time, photographs of people wearing kimonos on the street, and other images of artwork – fashion magazines and artist’s paintings – showing trends. This is a stunning collection, in a sturdy, hardcover book that would make a wonderful gift. Kimono: The Art and Evolution of Japanese Fashion is truly a book worth keeping in your permanent collection.