Love For Rent by M2 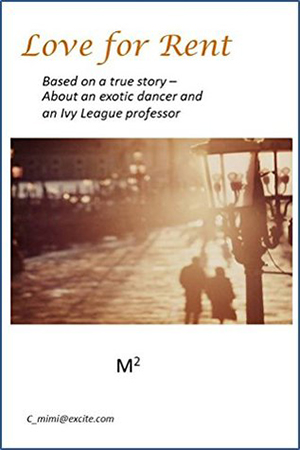 The book Love For Rent, written by M2, is the story of a stripper who falls in love with one of her many clients. Molly has been working at the Kit Kat Club for a few years, giving up her life as a young stockbroker to make much easier cash as a dancer. Little did Molly expect to meet Jonathan Siefert, a married Ivy League professor from the east coast. Before they know it, the two have fallen fast in love, but with Jonathan’s unhappy marriage and the distance, the two are not sure if it will work. Will love find a way, or will jealousy seep into every crack in their relationship?

It’s difficult to admit, but Love For Rent is actually an oddly indulgent read. Based off of a (supposed) true story, the author gives plenty of insight into the life of a stripper and what happens behind the scenes in an average club. While some embellishments may have been put into place here or there, most of the provided information seems reliable, consisting of actual facts. There are plenty of mentions of sex in the book, unsurprisingly, but all acts presented are tamely written (the lap dances, however, are written with a bit more depth). What’s more, Love For Rent presents two intelligent protagonists – the philosophy professor always pontificating and Molly who’s incredibly knowledgeable when it comes to the stock market and astrology. These traits of each character are quite enjoyable and give the book pleasant quirks. The story also manages to read rather quickly; there’s not too much depth in the novel’s substance, but it is easy to gobble up in the course of a few sittings

While indulgent to take in, Love For Rent also makes for a frustrating read. The biggest problem in this book is not the fact that it portrays the life of a stripper. On the contrary, it’s nice to see well-rounded, humanized characters who do this profession for a living. It’s how the two main characters, Jonathan and Molly, act towards each other throughout the novel. Their mood swings are, for lack of a better word, insane; they are the portrait of an unhealthy relationship. Jealousy in a character is one thing – after all, it’s only human for anyone to feel jealous at times – but these two shift between jealousy to apologizing, blissful to miserable so often that the reader will begin to question why the two even stay together in the first place. After one of the several times they break up, Molly calls Jonathan literally dozens of times in a row to leave varying messages, then acts like doing so was entirely normal. Molly withholds sex, love, and kindness when she finds out information about the girls Jonathan was with before he even met Molly, as if he wasn’t allowed to love anyone else in his lifetime. What’s more, she becomes insanely jealous when she finds out Jonathan cheated on her, despite the fact that she had been sleeping with a few other men for money throughout their entire relationship. The characters each act so irrationally that it’s almost too much for the reader to stomach.

The text itself is also not the best written. It’s littered with typos throughout and the written words are simplistic at best. The most confusing part of the entire novel – even more confusing than why the two central characters tolerate one another – is the ending. Without giving away too much, the story leaves Jonathan and Molly’s relationship in a fuzzy, gray area and flashbacks to Molly’s past. The author then examines Molly’s choices that led her to where she is in present day and then, without any warning, the book ends. No resolution is given. The audience is left wondering if the two made a clean break, bettering Molly as a whole, or if the two are destined to be stuck in this vicious cycle of a horrid relationship. There is no closure to be found at the novel’s end.

While flawed in many ways, Love For Rent is still an oddly enjoyable read. Perhaps it is not every reader’s cup of tea, but is certainly an adventure to experience.