The Art of Assassin’s Creed Syndicate by Paul Davies 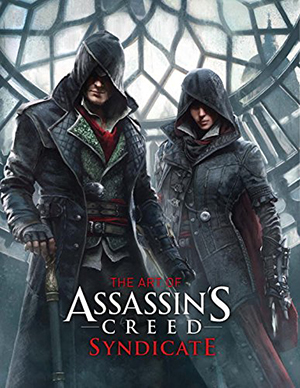 Fans of Ubisoft’s Assassin’s Creed series will want to take a look at The Art of Assassin’s Creed Syndicate. The book is completely full of artwork that helped develop Assassin’s Creed Syndicate. This isn’t a collection for people interested in screen shots from the game, but rather a comprehensive collection of concept art for the game’s characters, scenery, and weapons. The book is a large coffee table book, and unlike some art books, which can include several small images per page, the illustrations found in this book often cover full pages with many being two page spreads. The book even includes two fold out pages that have dynamic illustrations that cover three full pages!

The book isn’t just illustrations. It also gives some background on the characters and shows some of the thought process that went into the creation of the gangs, which locations the game featured, and the various elements that helped flesh out the world – such as coaches and boats. The boxes of text are small and concise, allowing the images to largely speak for themselves. However, this also means that if you are expecting to read essays of text from the developers and artists involved in the project this may not be the book you’re looking for.

For people interested in getting a taste of what goes on behind the scenes – the preliminary work, much of which doesn’t always end up in the game itself – this is a book worth checking out. Titan Books has once again compiled a stunning visual treat in The Art of Assassin’s Creed Syndicate.