The Fugitives by Christopher Sorrentino 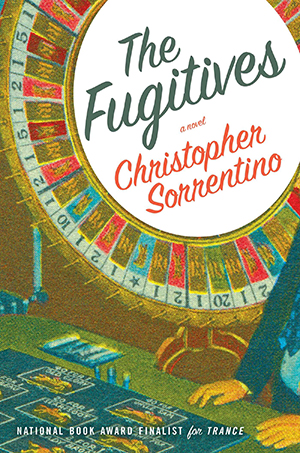 The Fugitives, by Christopher Sorrentino, follows Sandy Mulligan and Kat Danhoff, two total strangers brought together by similar interests and unlikely circumstances. After the second – and final – separation between him and his wife, Sandy retreats to a quiet Michigan town in the hope that the solitude and distance will help him finally finish his newest book. Not long after his arrival, he crosses paths with Kat at the local library; both parties present for the storytelling hour with John Salteau for entirely different purposes. After learning she’s a journalist, Sandy agrees to help Kat dig up Salteau’s past and uncover what secrets he may be hiding – but are the two of them getting in over their heads?

On a surface level, The Fugitives is a great book. The pages are brimming with a descriptive vocabulary, three-dimensional characters, details in every paragraph, an intriguing premise, and a delightful setting. By all means, this book should work magnificently. It goes without saying that Sorrentino, without a doubt, is a good writer… on a technical standpoint.

The novel crumbles when it gets into the actual meat of the storytelling. The plot, while present throughout, never quite seems to come together. The characters are unlikable and uninteresting despite having quirks and backstory dumped onto every single one them. Readers will find it a struggle to care about the outcome of any member of the cast of characters, even the two protagonists. The paragraphs, though well written, go on and on for far too long, making the reader feel like they have to claw their way through every page. It’s simply not great storytelling. Plus, the notion of the protagonist being a male writer, having cheated on his wife, and crossing paths with a beautiful woman who’s incredibly attracted with him? Yawn. It’s been done a million times before. This reviewer feels that now is an applicable time to share this famous quote of Joe Haldeman’s to add some context: “Bad books on writing tell you to “WRITE WHAT YOU KNOW,” a solemn and totally false adage that is the reason there exist so many mediocre novels about English professors contemplating adultery.”

There are moments of interest – particularly when quick, snappy dialogue is involved – but those moments rarely last, and the reader will revert to counting the number of pages until the chapter is over. Speaking of dialogue, Sorrentino gives almost all of his male characters these long, drawn out, sleep-inducing monologues that often go on for at least one solid page. However, not a single female character receives one of these monologues. The women speak maybe a few sentences put together at most, but then are often cut off by the men around them striking up yet another preachy rant. On the one hand, the reader may be thankful that the few women in this book don’t talk as much, saving them from having to read even more boring dialogue. On the other hand, it’s a tell of the author in the way that he presents women. It’s also worth mentioning that every female in the book is either meant to be seen as a mother figure or a sexual partner for the male protagonist. Take that as you will.

In the end, a book that could have been an interesting story falls almost completely flat on its face. Again, the writing is solid, and there are moments of interest in the book, which tend to be buried underneath the dull storytelling. Readers may pick up The Fugitives anticipating a success, but this will only lead to disappointment.