Threadbare: Clothes, Sex, and Trafficking by Anne Elizabeth Moore, illustrated by The Ladydrawers 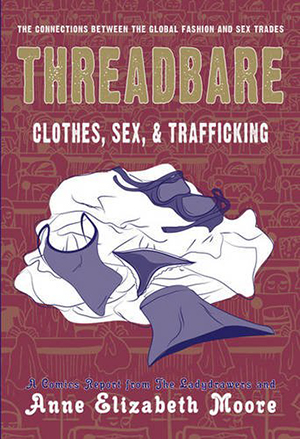 If you buy clothes from a retail chain, this book affects you. If you care about the general welfare of women, and all people around the world, this book is for you.

Threadbare: Clothes, Sex, & Trafficking, by Anne Elizabeth Moore, was originally published as a monthly investigative comics journalism series. The result is a book that reads almost like a graphic novel with a loosely connected plot, except it’s non-fiction.

“The threads that connect the sex industry to the garment industry are many, but if you look closely, you can figure out how to unravel them.”

There are four main chapters: The United States, Austria, Cambodia, and The World. Each of these consists of multiple comic strips written by Moore and drawn by various artists. Depending on the artist, some of the fonts are difficult to read. Otherwise, the drawings and the cited research compel the reader to finish this quick read and feel uneasy in his or her very clothes.

According to Moore, the international apparel industry employs between one sixth and one seventh of all women on earth. The majority of workers at the largest clothing companies are female. Since the wages women earn from the apparel industry are so low that they often cannot make ends meet and there are so few other employment options, many become sex workers. Some girls don’t even have a choice, and their parents sell them into trafficking.

Despite the belief of some people, anti-trafficking efforts make life harder for sex workers. Instead, Moore outlines at the end a few different things that people can do to help improve the situation for women around the world. After the bleak reality of her research, this makes for a somewhat hopeful outcome and empowers the reader with something to do.