The China Mirage: The Hidden History of American Disaster in Asia by James Bradley 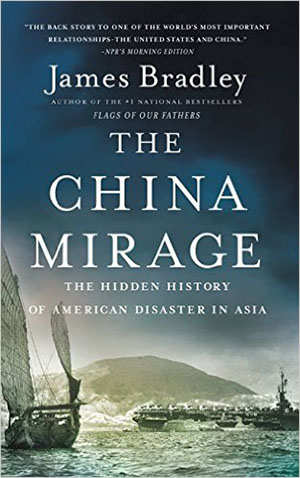 In China Mirage, author James Bradley explains how foreign policy may arise from the secret manipulations of presidents behind the backs of experienced officers of the US State and Defense Departments. By analogy it calls attention to the dangers of foreign interested lobbyists.

The bulk of the book tells the story of how Chiang Kai Shek and the Soong sisters, one of whom he married, together with his brother-in-law, T V Soong, “lost” China and fooled America into believing that by supporting Chiang, they had a puppet they could manipulate. America was taken in by a combination of factors – that Chiang and the Soongs were graduates from American universities (Chiang was from Harvard) and became Southern Baptists (an important factor to Christian America – it was fervent in its zeal to spread its Christian religion to the Chinese peasants), Chiang’s dishonesty, his sister-in-law’s cunning, the popularity of Pearl Buck’s book The Good Earth, America’s ignorance of China and the Chinese, and lastly, America’s own “China Lobby” consisting of top aides of President Franklin Roosevelt who believed that Chiang would beat the Japanese and also the communists. Billions of dollars were given to Chiang’s “New China.”

There is little that is conceptually new in the book, but it contains much detail that was new. Bradley is somewhat uneven, focusing too much on the China Lobby and Chiang and paying too little attention to others who played important roles in these dramas, such as Josef Stalin, Mao Zedong, the Japanese leaders, Ho Chi Minh, Korea’s leaders, and others.

Bradley makes the somewhat simplistic case for how we could have avoided WW II through continued sale of oil and other raw materials to Japan. There is also a tremendous obliviousness to Chairman Mao Zedong’s monstrosities and the 80 million Chinese murdered by Mao do not get a mention.

The faults aside, Bradley’s book is an excellent study of the intricacies and complexity of foreign policy analysis, to wit, that foreign policy is not a monolithic force controlled in a country’s capitol nor solely by its leader.