Every Anxious Wave by Mo Daviau 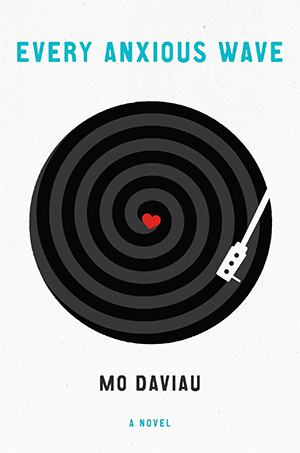 Karl Bender, former guitarist for Axis, was enjoying his relatively boring life tending to his bar and entertaining the occasional fan. One Sunday afternoon while searching for an errant army boot, Karl discovers a wormhole in his closet and falls into the past. He is unable to interact with anyone, but is treated to a concert he had attended back in the early 1990s. Seeing an opportunity, his best friend, Wayne DeMint, creates a software program that allows them to calibrate the wormhole to send people back to a specific time and place, and sends them home using an electric power source and their cell phones. They set up a fruitful underground business of sending people to the recent past to attend concerts through history. However, Wayne dreams of more, and during an attempt to travel back to 1980 to save John Lennon from his grisly fate, Karl accidentally types in 980 and strands Wayne in a time far before the advent of electricity. In an effort to retrieve his friend, Karl tracks down Lena Geduldig, settling on her due to her expertise in cosmology and string theory, but mainly because she was wearing a Melvins T-shirt. Lena thinks she can get Wayne back, but also thinks that visiting past concerts is a waste of a wormhole. Can they resist the temptation to change the past, or must the past change in order for them to have a future?

“YOU’RE TOO DUMB TO FIX THIS YOURSELF. GO FIND AN ASTROPHYSICIST.”

Every Anxious Wave is one part science fiction, one part romance, and one part musical appreciation class. A debut novel written by Portland local, Mo Daviau, this is a book that starts quickly and won’t let go until you’ve reached the end. Karl, our reluctant protagonist, is a refreshingly normal character. He’s slightly overweight, in his mid 40s, owns and runs his own bar, and is still mourning “the one that got away.” His hang up with his ex, Meredith, complicates his initial connection with Lena, but adds some great depth to his character. Lena is chubby, extremely intelligent, and incredibly stubborn. She is also very damaged, having suffered through growing up with an abusive stepmother and a rape that destroyed her hope of attending her preferred college and derailed her original career plans. Lena and Karl’s initial connection is through their love of music and tattoos. However, this connection is strengthened – and occasionally nearly destroyed – by their trips through time.

The book plays heavily with the “what if” factor – humanity’s constant desire to go back and change critical decisions believing that it would change the future for the best. While some of the changes are indeed beneficial, some of their alterations can be seen as self-serving. In one instance, Lena’s decision to change the past actually deletes someone from existence. Karl struggles with this off and on through the rest of the book, particularly so since he appears to be the only one to remember. Karl quite possibly destroys a future version of himself – one that he’d actually been in contact with – and nearly prevents his stepdaughter from even being born. These tragedies and near tragedies make the reader think, and ensure that the book is much more complex than it appears at first glance.

The book is also wonderfully feminist, and not in the overbearing way that many people seem to expect from that word. Lena, as co-protagonist, takes up quite a bit of the screen time. She goes into detail about how being raped affected her life from then on, something that many victims of rape struggle to articulate. This also feeds into her discomfort in her physical relationship with Karl. She also struggles with body image, something that every woman deals with on a daily basis to a greater or lesser degree. Lena also talks about the struggles women face in the workplace – particularly in the male dominated fields of math and science. Near the end of the book there is a poignant passage where she writes the following in an article:

“If this is a matter of being inspired because a chubby, nerdy science girl from Montana found true love, I get it, but I prefer to focus on the work. Many of us have a long road ahead as we begin our careers. We’re here to do the work. We’re here to support each other, to make sure other women succeed, and to not give up when giving up seems like the choice everyone around us wants us to make. Let’s keep sight of that. And though I’m really honored, and maybe a little confused, by the attention I’ve been getting lately, I definitely do NOT want anyone to look up to me for any reason other than my research and what I contribute to our community of female science students, not because I’m married to the guy who teaches Intro to Quantum in a sick leather jacket.”

Lena isn’t the only well-represented female character; Glory, Lena’s future-daughter, Jodie, wife of the former Axis lead singer, and even Meredith, Karl’s ex, are all complicated and realistic – some more likeable than others – characters.

Every Anxious Wave is a bizarre and captivating read; full of great humor, engaging and heartfelt characters, and more musical references than is typically expected from a science fiction novel that plays with wormholes and time travel. This is a debut novel that will not disappoint!