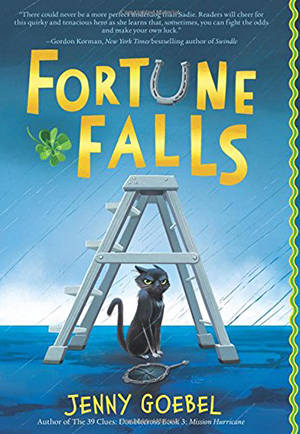 From the very first scene, Fortune Falls establishes just what a terrifying place its eponymous town is; our protagonist Sadie, a luckless 11-year-old girl, drops her little brother Petey off at daycare, and they see one of Petey’s classmate’s mother in a back brace. In this town where all superstitions are real and bad luck can mean a death sentence, the mother’s child stepping on a crack literally broke her back.

Sadie’s unluckiness is not mere preteen clumsiness, it’s an inborn trait that curses her in everything she does. In Fortune Falls, the “Luckies” are blessed with all their wishes coming true, even down to traffic lights turning green just for them. But the Unluckies’ bad luck can literally make buildings collapse around them if they aren’t careful, so the Luckies segregate the Unluckies from age 12 so they don’t cause accidents and injure or kill any of the Luckies. Unluckies also seem to hold the lowest job positions in the town—although do you really want an unlucky, accident-prone person to repair your roof or work in your sewers?—and their lot in life is generally not good. If you don’t pass the Luck Test after you turn 12, you’re sent to a boarding school for Unluckies, and your life is essentially ruined. And that’s what Sadie fears is coming to her if she doesn’t pass the Luck Test…and unfortunately for her, it’s only a few days after her 12th birthday, which falls on Friday the 13th.

As an adult, one might wonder why any parents choose to live in such a cruel place at all, if your children have a chance of being Unluckies, suffering horrible injuries, potentially injuring or killing those around them, causing property damage, and then being taken away from you when they are 12. This is all explained later in the book, but as an adult or a parent the concept of this book might make you a little anxious unless you suspend your disbelief. (And why don’t they just do away with sidewalks altogether, to spare all those poor mothers’ backs?)

But for an adolescent reader, the world of this story makes sense. Puberty and middle school can sometimes make everyone feel like they have a bad luck curse on them, genetically predisposing them to be unlucky, clumsy, awkward, and shunned. And you can’t help but feel for Sadie, who is so strong and responsible even in the face of her ordeals, while still harboring believably teenagerish thoughts, like her sort-of crush on her best friend Cooper, and her seething jealousy of popular Lucky girl Felicia, who uses her luck (and the coercion of her parents) to get Cooper to take her to a school dance.

The bad luck can also be read as a metaphor for class differences (or even race issues?), taken to an extreme level. Cooper’s insight about how the Luckies say hurtful things out of cluelessness, because they simply don’t understand how hard the Unluckies’ lives are, is one of the moments that especially highlights the story as a Haves vs. Have-Nots parable. It gets a little heavy-handed toward the end, when Felicia kicks an Unlucky out of the school dance and rants about not wanting to let People Like Him anywhere near the Luckies’ rarified lives. But it’s a handy metaphor that young readers might be able to apply to other aspects of society, and may make them think more critically about social issues.

The terror of the setting also raises the stakes: Sadie doesn’t have to just pass a test at school so she doesn’t fail the class, she has to pass in order to maintain her life as she knows it. There is a heartbreaking moment where Sadie wonders how her little brother will manage to make it to and from school safely, and who will get him his after-school snacks, after she either dies in an accident caused by her curse, or goes away to the Unluckies’ school. It’s heavy stuff at times. With all the bad luck coming her way throughout the story, it seems impossible, and you’re kept turning the page to find out how she manages to escape from under the cloud of her ill fortune, pass the test, and stay with her family. But Sadie is smart, and very capable in spite of her bad luck, and you can’t help but root for her.

In the end, it isn’t quite explained how Sadie does it, which didn’t feel completely satisfying. She acknowledges herself that she will probably always be cursed with bad luck, so her victories are only temporary, and this means that there is no escape for any of the poor Unluckies in this town. It’s an anxiety-producing ending in that respect: when you come to know and love a protagonist, you want to be assured that they’re okay, or at least better off than when they started, and that the author has put them into good hands. But maybe, in a story about the mercurial nature of luck, that’s the way it should be.