Heads: A Biography of Psychedelic America by Jesse Jarnow 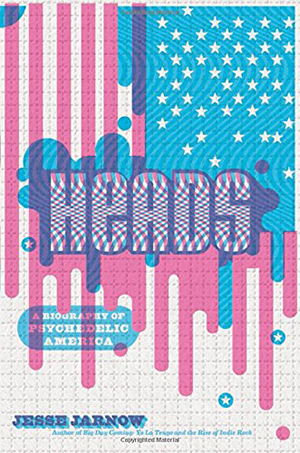 Jesse Jarnow’s Heads: A Biography of Psychedelic America starts off right where you expect it to: with the Grateful Dead. Even now, close to 50 years on, the Dead are still the band that comes to mind first when most people hear the word psychedelic. Jarnow, however, quickly takes the book from the Grateful Dead to the ripples and repercussions of the pyschedelic movement. He examines spinoffs of the movement, such as “back to the land” and hippie communes of the 1960s and 1970s. He looks at psychedelia in more urban settings, including New York, and even briefly follows the thread of psychedelics to Europe, which is an off-and-on touchstone for the American psychedelic movement.

The strongest part of Jarnow’s book is the character studies that he has inserted into the text. The author has clearly taken the time to do a personal deep dive on many of the important, but not necessarily well-documented figures of the psychedelic movement, including “LSD-OM” also known as Chad, the father of the New York graffiti movement, and the predecessor to a New York that is familiar to many Americans who grew up with television news or TV and movies from the 1970s and 1980s. Jarnow also investigates less obvious or lesser-known connections, like the importance of psychedelics to the early internet – particularly the computer research lab at Berkley, where Dead fandom, computer science, and psychedelics all met, again with wide-ranging implications.

The text of the book itself is slightly “trippy,” written in an obviously well researched, but ultimately stream of consciousness style that seems to almost drift from one location or character study to the next. Although this format may frustrate history buffs who are looking for a “who, what, where, when, and why,” the end result is an accumulation of knowledge that fits together like a jigsaw without ever becoming overtly historical. Despite the somewhat unusual format this book is highly recommend for any reader who is interested in the history of America in the past 50 years. Although the subject seems narrow, readers will find that the movement, or at least the people, touched many places and many aspects of society that influence the lives of almost every American today, whether they know it or not.