Only the Stones Survive by Morgan Llywellyn 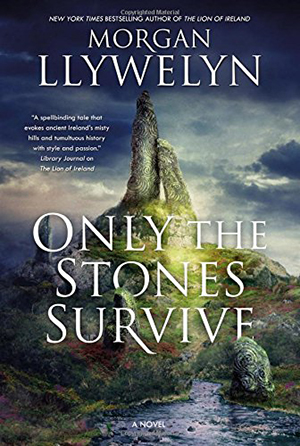 The Túatha Dé Danann have long inhabited the island of Ierne. They have a peaceful co-existence with each other and with the island itself. Joss is born into this idyllic existence and lives a happy life with his parents and his clan. Things suddenly change for Joss and his people when their island is invaded by The Gaels. Savage and cruel, the Gaels slaughter most of the native inhabitants of the island. Those who remain flee underground. Though young, Joss must take up the leadership of his people if they are to have any chance of survival.

Only the Stones Survive by Morgan Llywellyn is a breathtaking and enchanting novel that is part myth and part history. She seamlessly weaves in the fantastical with the real to create a story that weaves a spell around the reader and transports them to the island of Ierne. The reader weeps for the Túatha Dé Danann as their peace is broken and their clans scattered: their loss feels palpable. The writing is remarkably descriptive throughout the book and while it doesn’t shy away from violence, it isn’t overly descriptive or disturbing about the violent acts themselves for the focus is on the characters themselves and how they respond to acts of war and intrusion. Only the Stones Survive is a haunting book that cannot be put down and will not be forgotten.