Pathfinder Tales: Beyond the Pool of Stars by Howard Andrew Jones 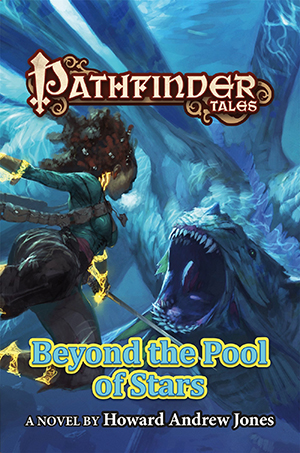 Sometimes, no matter how hard a person tries to leave their past behind, it catches up to them.

In Beyond the Pool of Stars, by Howard Andrew Jones, Miriam Raas, having learned her father has died, returns home to say goodbye and to try to find some closure with the man she both resented and looked up to. She hasn’t even made landfall before she has to save her family’s ship from attack, and that’s just the beginning of the trouble that awaits her. Her family is in debt, and the only hope for solvency is a salvaging job more dangerous than the one that took her father’s life.

Beyond the Pool of Stars takes place in the award-winning world of the Pathfinder Roleplaying Game system. It is a land of magic, myth, monsters, and heroes; Jones makes good use of all those elements to create a fun, action-packed adventure. What makes Beyond the Pool of Stars so good, however, is the characters. Miriam Raas struggles with family responsibility, and also with the weight of her half-native heritage. The salvage operation she must undertake benefits the colonial government of her homeland – a colonial government that has not always shown respect or love to those of native or mixed heritage – as much as it does the Raas family.

Equally interesting is the character of Ivrian, the only son of a noble house, who has more interest in writing and theater than he does in politics. Revealed early on to prefer men to women, the narrative of the book is nonetheless unconcerned for the most part about Ivrian’s sexuality – which only makes sense when the characters are fighting for their lives against both the dangers of the jungle and the lethality of deceitful politics. Ivrian is also undeniably heroic. He leaps to the defense of his comrades, does what he thinks is right, and on more than one occasion saves the day. His character both embraces and denies tropes and is a pleasure to read.