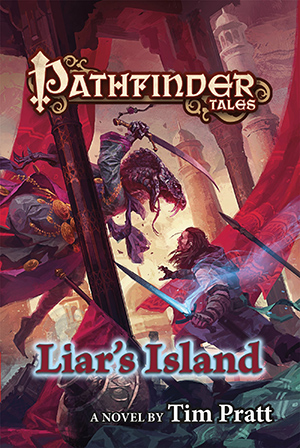 Rodrick is a lying, thieving, womanizing con man who just so happens to have a talking sword made of living ice. It makes him an odd but enjoyable choice to be the protagonist of a fantasy novel. Despite his bad qualities, he is endearing: he has a personal code and limits what he’ll do for money, though he’s certainly no Robin Hood. While he mostly looks to women as potential sex partners, he doesn’t do this from a place of entitlement, but rather from the perspective that men and women both enjoy sex and should be able to do so without strings.

In Liar’s Island, the latest tale of Rodrick, written by Hugo Award winner Tim Pratt for the Pathfinder Tales series, Rodrick is summoned by the king of a island of wonders, where magic is part of everyday life and genies and elementals are bound as servants to the powerful. What starts as a simple offer soon turns into a series of plots, larceny, treason, and, of course, lies. There is a lot of humor to the narrative, not the least because Rodrick generally responds to danger by trying to run away from it, unlike other heroes; but despite his best attempts, Rodrock is pulled ever more into a net of intrigue – often as a consequence of his own decisions.

Rodrick very much fits the fairytale archetype of the dashing trickster rogue, whose charm makes up for his questionable morality. No matter the results of Rodrick’s plans – whether they succeed, fail, teach him a lesson, or save the day – it is entertaining to watch him spend so much effort trying to be cleverer than everyone else. The story is also carried along by the banter between Rodrick and his sword, Hrym, who poke at each other in the way of best friends.

The setting for Liar’s Island is in the vein of One Thousand and One Nights. There are efreeti, martial-artist monks, flying carpets, fantastical creatures, jungles…really, what more could a person ask for in a fantasy novel?