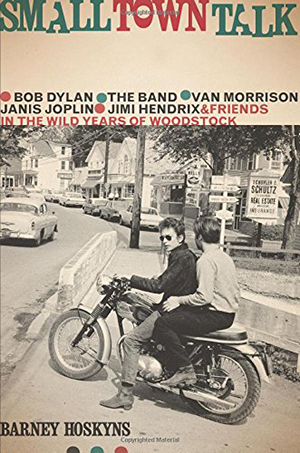 Despite the title, Hoskyn’s book is centered not on the people listed in the title, but on the legendary Al Grossman. Grossman was an enigmatic manager, who varied between being a benevolent father figure, and a despicable money-grubbing capitalist. Initially most of his clients both worshipped and feared him, and ultimately broke from him when they felt that he was taking too large a piece of their action.

The author spins the tale of the Woodstock community, an artist’s community from the early twentieth century. The town served as a sort of pastoral hideout for New York artists overwhelmed by the rapid pace and stress of city life. When Grossman moved to Woodstock, a number of his clients, notably Bob Dylan, in turn followed. As the 60s turned into the 70s, Grossman built an empire, consisting of a large recording studio and a cosmopolitan restaurant. The Woodstock festival of 1969, though not actually held in the town itself, attracted a large number of tourists to the town.

Although Hoskyn’s coverage of Bob Dylan is well balanced and easy to follow, he is less successful in his portraits of The Band. Three of the members were seriously addicted, variously, to drugs and alcohol, which the author details. What he never discusses is why the other two members avoided these traps. In fact a bit too much of the book is devoted to drugs and alcohol, and the book would have been more satisfying if the author had paid more attention to the music. A number of musicians – like Billy Faier and Happy and Artie Traum – are often quoted, but the author has next to nothing to say about their music. John Sebastian, the leader of The Lovin’ Spoonful has lived in Woodstock for years, but is barely mentioned in the book. Eric Weissberg, who recorded the theme from Deliverance, is another musician who is not covered at all in this book.

Another question omitted from the book is why the town never developed a specific musical sound or identity, as Seattle, San Francisco, and Atlanta for example have done. The book raises as many or more questions than it actually discusses.