Sounds Like Me: My Life (So Far) in Song by Sara Bareilles 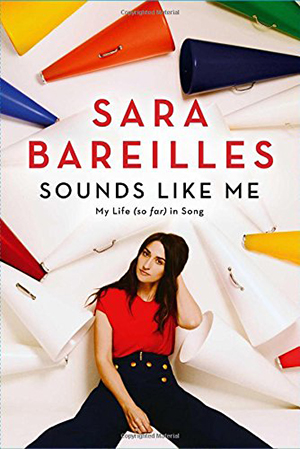 Without a doubt, Sara Bareilles can write a song. Clearly, the five-time Grammy Award nominee’s skill of word crafting translates to creating a witty memoir of her life (so far). Written as a collection of eight essays, Ms. Bareilles uncovers the meaning behind her songs “Once Upon Another Time,” “Gravity,” “Love Song,” “Beautiful Girl,” “Red,” “Many the Miles,” “Brave,” and “She Used to Be Mine.” Starting with her childhood in Eureka, California, Bareilles describes the struggles, and joys, of finding a niche in the arts. Bareilles’ following commentary on her journey to the present day artist she is, grants readers and fans an inside look to her process of creating meaningful music and finding herself along the way.

Combining humorous intent with raw life-lessons, Sara Bareilles evokes a powerful message to all readers. Even for those unfamiliar with Bareilles’ music, Sounds Like Me: My Life (So Far) in Song holds not only just the meanings behind some of her most popular music but also what she has learned during her journey to becoming a leading musician in today’s world. Each of the eight essays provides introspective commentary as conversations held between Bareilles and the reader, allowing for easy flow between topics and understanding. With witty banter mixed in with heartfelt moments, Bareilles’ writing speaks to everyone.