The Ancient Castle: Lumen Series Book I by Matt Sprunt 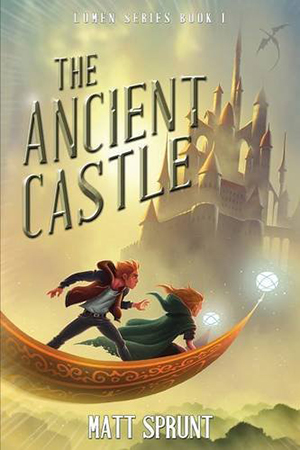 Scott Frontier is about to begin his freshmen year at Castle One, an English speaking military school in Germany. Following in his older brother’s footsteps, Scott is excited but nervous to start school. Unlike his older brother Eric, Scott has a hard time making friends and has a temper. His fears are soon allayed when he becomes fast friends with his roommate Ned and manages to get into only one fight in the first part of the term. Scott also starts to learn that his school may have more secrets than he thought. He meets a girl named Azinine on Halloween who seems to appear out of nowhere and disappears just as mysteriously. He also sees walls that can be walked through and begins hearing voices in the woods. Scott soon learns that the school is a travel point to another world called Lumen. Scott begins visiting with Azinine but all is not well in the land: there is no king and there is conflict between the high mages and the people of the land. Scott is soon embroiled in the situation when Azinine is kidnapped. He must use his wits and his emerging talents to find Azinine before it is too late. Along the way Scott discovers his family’s connection to Lumen and finds out more about himself and his history than he ever dreamed.

The Ancient Castle by Matt Sprunt is the first book in the Lumen series and it’s a solid start for teen fantasy novel. Scott is generally a fun hero who stands up for his friends and tries to do what he thinks is right, even if it means skirting or even breaking rules. The supporting cast of characters at the school are well written and are more than their initial stereotypes. In The Ancient Castle the bully can surprisingly become the ally and vice versa. The parts of the book that take place in Lumen are fun and filled with magic and fantastical creatures. The action in the book is described well and keeps the reader interested. What’s less successful is some of the dialogue in the book. Some of the conversations feel created instead of natural and age appropriate. At those times the reader is taken out of the book and the story. Additionally there are scenes with supportive characters that lag and don’t help move the story along. Overall this is a solid start to the series and older children or teens who are fans of fantasy will enjoy The Ancient Castle.