The Book of Aron by Jim Shepard 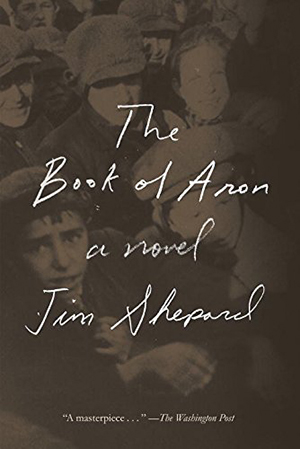 Aron is a young Jewish boy growing up in Poland on the brink of World War II. Even in the beginning he seems to be plagued by a cloud of pessimism and selfish desires, but when the Nazi’s roll into Poland, Aron’s situation becomes slowly and steadily worse. Soup kitchens disappear, the Jews are required to wear armbands, and the children resort to smuggling and stealing out of boredom after the schools are closed down. Soon the Jews are herded into smaller and smaller zones, where overcrowding makes hygiene and hunger pressing issues, and the children’s smuggling becomes a way to fill empty bellies, and then the only means to survive. Aron and his few friends fight rival smuggler gangs, and dodge the Nazi’s and yellow police. Things grow bleaker as the years trudge on, and Aron’s losses continue to pile up. Finally he is completely alone, starving, and suffering from hypothermia in the streets. At what costs is he willing to survive? Will Aron finally think of someone besides himself?

The Book of Aron is a dark, heartbreaking, and depressing read. While most of us are aware of the sufferings the Jews experienced in the Warsaw ghetto, Aron’s story brings a more personal account to these horrors. As a young boy, only eight years old when everything begins, he is a child that grows up knowing almost nothing else. Where adults bemoan the lives they had before, to Aron memories of sitting in a field having a picnic with his family is so far removed as to have been just a dream. His reality is the typhoid epidemic that is wiping out entire buildings, the lice that covers everyone from head to toe, and the hunger that makes him risk his life every day.

“My mother said my father shouldn’t beat such a small boy, but my father said that one misfortune was never enough for me, and my uncle told her that my kind of craziness was like stealing from the rest of the family.”

Aron is not the most sympathetic character. Readers are unlikely to find themselves closely attached to him, but instead use him as a vessel to observe the events around him. This level of detachment begins right from the beginning. On the second page of the book, Aron is accused of being selfish. “Sh’maya only looks out for himself, my uncle always said, but I never wanted to be like that. I lectured myself on walks. I made lists of ways I could improve.” As the narrative continues, Aron is repeatedly portrayed as being an observer, and has a distinct lack of deep emotions. In fact, much of his behavior strikes a slight sociopathic tone. However, while part of his behavior may stem from a psychological disorder inherent in the character from birth (or just the author’s decision to write the book in a removed first person point of view), this form of removal is also a symptom of severe PTSD; a survival coping mechanism, which is understandable given the trauma he experiences over the course of the Nazi occupation.

The narrative somehow manages to maintain this distance from the character and the events at all time. This means that even when confronted with events and sights that would turn most stomachs and force people to put down the book for a time, Aron and the reader are able to keep going. Where in other books this may be a deal breaker for readers – after all, it can be difficult to keep reading if you don’t actually like the protagonist – this distance is somewhat of a blessing in disguise, and it allows readers the time to process the sheer scale of brutality they are witnessing.

Surprisingly enough, Aron may not actually be the true focus of the story. Instead, Aron’s own adventures circle around those of Janusz Korczak – a Polish-Jewish doctor and director of a children’s orphanage in Warsaw. Korczak appears in and around the narrative throughout the entire book, briefly in the beginning before becoming a major player in the last third. This historical figure adds a whole new layer to the narrative as readers watch the last days of this famous figure through young, traumatized eyes. He is depicted as crazy, growing delusional with near starvation and illness, and yet still a very kind man who puts the children’s care and morale above all else. For those who know Korczak’s story, the ending of the novel does not come as much of a surprise – although Jim Shepard has managed to leave it somewhat open as to the fate of our young narrator.

In The Book of Aron, the world of the Warsaw ghetto comes alive, in all of its haunting horror. This is not an easy book to read despite its misleadingly simple technical style. This is a book that many will not want to read, but is one that should be read.