The Monstrous edited by Ellen Datlow 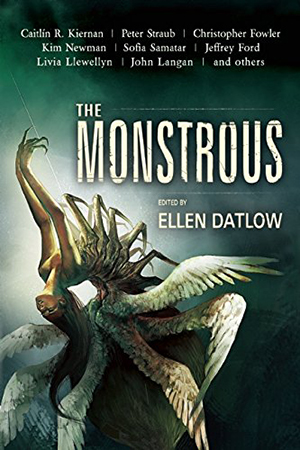 The Monstrous, edited by Ellen Datlow, is a collection of short stories that run the gamut of strange and otherworldly. There are certain stories that tend to stick out from the collection.

“Ashputtle” is another story that reminds this reviewer of a book that uses symbolism in a similar way. In Heidi Durrow’s The Girl Who Fell From The Sky, Rachel imagines a glass bottle inside her where she puts all the hateful things people say or do until one day it breaks and she speaks her mind. The teacher Mrs. Ashputtle in Peter Straub’s “Ashputtle” imagines a small hard stone at her center that she names Mother which is the only thing that makes her feel worthy.

“Knowledge is out in the world and can’t be taken back.”

“Down Among The Dead Men” is an interesting take on a concentration camp story. It is not clear whether the monster in the story was already there or created by the madness of the camp. “Chasing Sunset” seems to be a strange stream-of-consciousness narrative written in a haiku style. “Grindstone” is an angels and demons story that at times seems to evoke images of DC Comic’s Constantine.

Vivid imagery and compelling narratives help make this collection of stories an interesting read. Readers will be able to find something in this collection to sate their horror story needs.