The Nash Criterion by Erec Stebbins 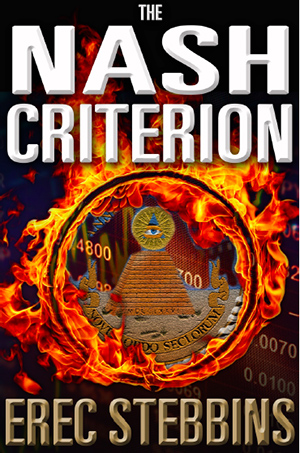 After the world had gone to hell, things got even worse for the elite FBI team run by agent John Savas. Their mission to arrest Fawkes, the computer hacker whose virus created chaos all over the world, ended in his death and their arrest. Treated like terrorists instead of government agents, the team realizes that there is a bigger plot to take over the government, declare martial law, and oust the sitting president. John and his team know that they now have a new and much more dangerous enemy: their own government. The resident computer whiz Angel Lightfoote begins to follow the source of the virus that was released by Fawkes. She soon discovers that the leaders of the coup have a puppet master and that the United States hasn’t been a country for or by the people in years. Working with the president and the few teams they can trust, Salas and his allies work on taking back the office of the president and the country itself.

The Nash Criterion is the fourth book in author Erec Stebbins’s Intel 1 series. Picking up where the previous book, The Anonymous Signal, left off, the book immediately puts the reader into the action and the aftermath of the previous novel. The action in this novel is fast and nail-biting. The plot unfolds steadily, weaving in truths and fiction to create a feeling of anxiety, fear, and very frequently, horror. The book nicely addresses questions of ultimate power and whether anyone should have it, even if they are considered the good guys.

The writing in The Nash Criterion is streamlined and focused resulting in a tense and exhilarating ride for the reader. This novel also reveals more details about the characters themselves, allowing the reader to learn the motivations of each of them and how they all ended up in Savas’s special unit. This makes them more real for the reader and provides higher emotional stakes for the book in general. The reader is invested in what happens to these characters. The book takes the global disaster and makes it personal. This is not a book that lets go of the reader; rather it holds on tight. It’s a book that will be mulled over for days after completion. Readers who are fans of political thrillers must read The Nash Criterion.