The X-Files The Official Collection Volume 1 – The Agents, The Bureau and the Syndicate by Titan Comics 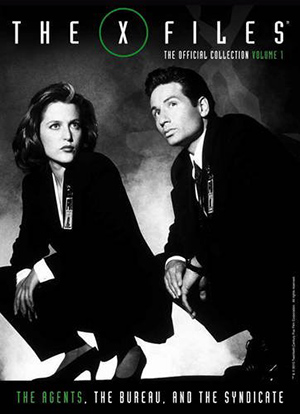 Everyone who was alive in the 90s knew about X-Files. Even if they weren’t watching it, they would at least recognize the theme music. While many science fiction shows existed before X-Files, this show was the one that made science fiction a household topic. And now, with the release of new episodes, it is the perfect time to brush up on the show that brought science fiction into the homes of millions.

Titan Comics has created a compilation of some of the best interviews and articles written in the official X-Files magazine that ran from 1993-2002. Within its pages are summaries of pivotal episodes as well as examinations of many of the characters throughout the series. There is even an episode guide in the back, which could be quite useful when looking for that one episode that is just aching to be watched. As an added bonus, there are multiple articles that are informative about the FBI (the real FBI) including a brief history of the organization and how Americans have viewed it over the generations.

It’s the perfect book for jogging the memory before watching the new episodes, or for just reliving the amazingness that was the series. The X-Files: The Official Collection Volume 1 is a great addition to any X-Files fan’s bookshelf.