Village of Immigrants: Latinos in an Emerging America by Diana Gordon 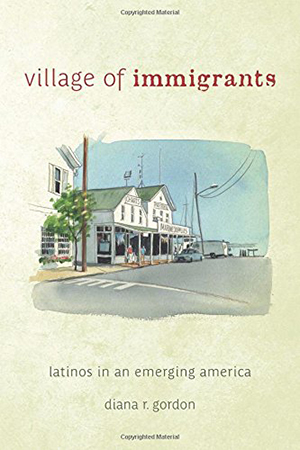 Author Diana Gordon was a professor of political science and criminal justice at the City University of New York (CUNY) (since retired). Her prior books and articles have concerned issues of public policy in general and, more specifically, criminal justice, including The Return of the Dangerous Classes: Drug Prohibition and Policy Politics, City Limits; Barriers to Change in Urban Government, and The Justice Juggernaut: Fighting Street Crime, Controlling Citizens.

In Village of Immigrants, Gordon intended to address not only a personal interest in immigration issues, but also a “professional discomfort.” Having twice taught a course at CUNY on American immigration policy, she realized she “knew almost nothing about how that policy affected the everyday lives of both recent immigrants and the native-born.” Whether it was because immigration was never apparently a subject of Gordon’s published research is not clear, but the book unfortunately suffers from a myopia that makes it little more than a brief anecdotal history of an obscure little hamlet tucked away in the state of New York.

Greenport, New York, is a village on the North Fork of Long Island, containing just over three thousand people. Using interviews with some of its inhabitants and a discussion of Greenport’s history, Gordon nevertheless argues that Greenport has become an exemplar of a national trend, to wit, immigrants spreading beyond the big coastal cities, driving much of rural population growth nationally. She often speaks of certain topics inherent to this small village as if they could be applied nationally, but escapes the charge of inapplicability by acknowledging that the book “is not a scholarly work” and that her “method is not rigorous” and the conclusions “are very personal.” With this caveat, she absolves herself of having to operationalize any of her terms; to engage in any case-study comparisons; to engage in any analysis of just how the unique history of Greenport could ever be applied to any other small village, much less to “small-town America” in general (as if every “small” American town were the same).

Relying exclusively on Greenport, Gordon argues that the town illustrates how “small-town America” has been revitalized by the arrival of immigrants in Greenport. Gordon does not identify any other small town, not even anecdotally, by way of comparison. She notes that the influx of immigrants to Greenport has increased the Hispanic proportion of the population to one-third. Given that Greenport’s total population has not altered substantially over the past several decades, she does not address the apparent flight of a substantial portion of the population at the same time that the Hispanic population has increased, though such a phenomenon has been discussed at length in academic as well as other types of literature.

Glaring in its absence is any discussion by Gordon of immigration law, in particular the Immigration Reform and Control Act, and its innumerable permutations, and what effect, if any, this legislation, its application and interpretation, has had on Greenport, much less the rest of “small-town America.”

Gordon contends that immigrants to Greenport effectively saved the town’s economy by taking low-skilled jobs, increasing the tax base, filling local schools, and patronizing local businesses. Gordon discusses this phenomenon as if it were novel, and that its discussion is novel. Beyond this, the “analysis,” such as it is, is limited to the hamlet of Greenport, and no attempt is made even to compare Greenport to the experience of any other “similar” locale.

Gordon’s generalizations applied to Greenport often lose site of the fact of its tiny population, as in the discussion of educational challenges: “In 2012 the student body was 37 percent Hispanic….” As she notes, however, at that time there was a total of 641 students in Greenport’s two schools, yielding a study size of 237 Hispanic students. She makes references to “many” of the educators’ opinions and views, yet the relativity of the term “many” is put in stark relief given the low number of educators that must exist given the tiny student population.

To the extent that the book provides a history of this small village and interviews with some of its inhabitants, the result is little more than an extended human-interest story. Filled as it is with anecdotal information pertinent only to Greenport and references to phenomena and issues already long discussed regarding immigration, the book does not fill any gap in the discussion on immigration policy or its effects on immigrants in “small-town America,” nor does the book provide any contribution to the dialogue on immigration in general.