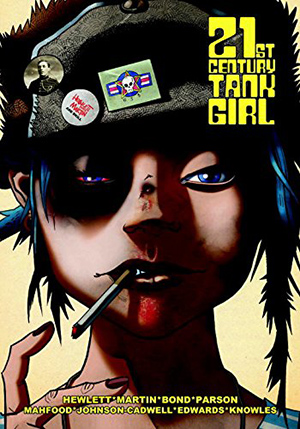 After a break of 20 years, Tank Girl is back – a joint between her lips, her favorite gun in hand, fighting the Power, and fighting just because.

21st Century Tank Girl by Hewlett et al. is less a graphic novel and more an experimental art project, with vignettes, poems, thoughts, jokes, chaos, and undefined filling its pages. The first story sees Tank Girl flying into space in a cock & balls shaped rocket with her imaginary friend. In the last story, Tank Girl takes a page out of Evel Knievel’s book with her usual flair for the dramatic. Some of the stories fall more into the adventure category. Some are surreal explorations of Tank Girl’s mindspace. All have an irreverent, tongue-in-cheek, intoxicated humor. The art is at times sharp and blocky, elongated and twisted, or lushly round. The same style that Hewlett brings to Gorrilaz also shows in some of the art of 21st Century Tank Girl, but there are as many artists are there are writers, and each art piece has its own personality and tone.

The argument could be made that 21st Century Tank Girl is a manifesto of feminism, individuality, and counter-culturism; it could also be said that characterizing Tank Girl as being so organized as to qualify as a manifesto is disrespectful to the anarchy that is Tank Girl. With the recent success of the Deadpool movie, now seems a good time for the reentry of Tank Girl into the marketplace. The two franchises have a lot in common: pushing boundaries, breaking their internal realties, and subverting the expected and the accepted. So long as Titan Comics successfully gets the word out, 21st Century Tank Girl should have a warm reception.