Blunderbuss Wanderlust: And The Eras of His Ways by David R. Shapiro, illustrated by Christopher Herndon 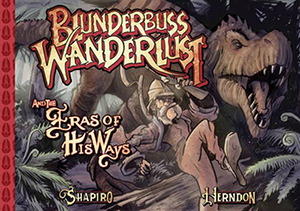 Do you like dinosaurs? How about poems in sonnet form? Visually unique graphic novels? Natural history and biology? Gentleman adventurers with impressive mustaches? Then this book will have something for you.

Colonel Victor von Vector is a vaguely Victorian gentleman, who was given a blunderbuss, a type of rifle, by a friend who has a “strange sense of fun.” Boy, does he ever! This blunderbuss, when shot, propels the shooter through time. Even better, the shooter can’t choose what era to visit, so the Colonel ends up being sent 600 million years into the past to make friends with some of the earliest life forms on the planet.

He tells the stories of his travels in sonnet form, because he’s an educated gentleman. The sonnets’ meters are sometimes a beat off, and they don’t always rhyme perfectly, but to be fair, it is hard to rhyme with words like “diplodocus.” Amusingly, he even pokes fun at his rhyming difficulties with lines like “I bid farewell to Tyrannosaurus/If you want a rhyme, grab a thesaurus.”

Our Colonel often has to run away from colossal predators like the nightmarish fish creature Dunkleosteus, as well as smaller creatures like the pesky Synapsids, which are Chihuahua-sized, ankle-biting pre-dinosaurs. As he moves closer to the modern age, he meets proto-humans like the Australopithicus, and early hunter-gatherer tribes, and his final visit is to one of the first ever cities off of the Ohio River: the beginnings of civilization as we know it.

The book avoids time-travel clichés by limiting the Colonel’s travels mostly to eras when he is the only human. He doesn’t go back in time and visit famous figures of the past, or try to change events; he simply observes and sometimes participates in the life of wild creatures of the prehistoric era. And it is all beautifully illustrated by Christopher Herndon, who makes the book look like an early 1900s travel journal, with the sepia-toned scenes suggesting faded photographs, and drawings in the margins of each sonnet that further flesh out each era. There are a lot of fun details to delight in in Blunderbuss Wanderlust – it makes one wish for a blunderbuss gun of one’s own.