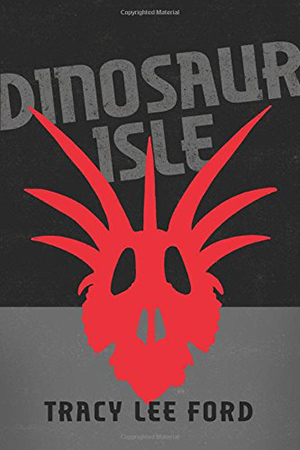 Human fascination with dinosaurs has existed since we discovered they roamed the earth. Upon the release of the blockbuster movies of the Jurassic Park era, the idea that DNA strands and gene mutation had progressed to a point where scientists could recreate what was no longer alive sparked our imagination. The endless possibilities always seem to revert back to recreating dinosaurs and having a complete disregard for the disaster that every author makes sure is inevitable. Dinosaur Isle, written by Tracy Lee Ford, takes the Jurassic Park concept a bit further and limits the creation of dinosaurs to being science based for research purposes only.

Jack McConnell must gain the knowledge of how dinosaurs now exist, and help save humanity from the newly evolved dinosaurs that have mysteriously escaped the secluded island they inhabit and are invading the population of humans. This thrilling story weaves in-depth, research based science, paleontology, and politics into a story line which should be complicated and mind blowing, but is so seamless in the artful approach that any reader is as fascinated as if watching the action unfold right before them. Beyond the story is epilogue after epilogue, which seems weird and yet again, works within the story that just can’t end – not that the reader will want it to – and the teaser may lead to sequel opportunities.

For someone who truly is a Jurassic Period enthusiast, an appreciation of justice to the complexity of DNA mutation and development of the species is thorough. For the reader who is a novice, or anywhere in-between, there is a glossary of terms that makes this science fiction book feel not only more life-like, but compelling due to the educational component it is providing too!

Can dinosaurs be stopped once they are created? In Dinosaur Isle, it certainly doesn’t seem so. Clearly there was a reason they went extinct and evolved into the animals we have today. The greater question begs that if we create them again, what happens if we have to live with them? Dinosaur Isle is truly worth the read to find out.