Fab Four Friends: The Boys Who Became the Beatles by Susanna Reich, Illustrated by Adam Gustavson 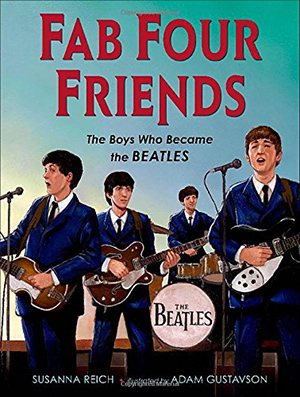 John, George, Ringo, and Paul were just a group of boys growing up in the back streets of London. Each of their young lives were defined by their struggles and their absolute love and devotion to music. Follow the meteoric of each boy from how they began playing music, who their early influences were, how they found each other, and finally, how they made it big as the Beatles. This book gives you an inside look at their home lives and what motivated each of them to dive deeper into their music.

This is perfect for any young Beatles enthusiast, as well as any parent who will inevitably be stuck reading this book over and over again. It is filled with interesting tidbits about each of the Beatles’ lives and how they evolved as a group. There is probably enough information in this book for it to be used as a reference for a school project, if such a project were to come up. The illustrations are beautiful, colorful, and reminiscent of Norman Rockwell; had he illustrated the lives of the Beatles, it easily could have been similar to Fab Four Friends: The Boys Who Became the Beatles.